The Missouri Western Alumni Association honored 13 people with 12 awards at its annual awards banquet Homecoming weekend. Eight Great Griffon Awards and Student Leadership Awards were new this year, honoring alumni from each of the University’s Colleges and three graduating seniors.

The following were honored at the 2017 Alumni Association Awards Banquet: 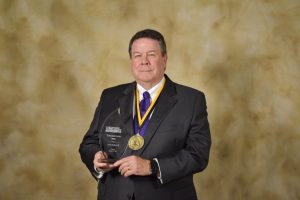 Distinguished Alumni Award
When James Sheehan ’78 has a career with Hormel that spans almost four decades. In 1979, he was hired as an accountant for the company and today is the Senior Vice President and Chief Financial Officer for the Fortune 500 company. His current leadership role oversees the critical financial and accounting functions, which includes five departments: accounting, treasury, internal audit, investor relations, and information technology services.

In addition to his Bachelor of Science in Business Administration from Missouri Western, he is a graduate of the Minnesota Executive Program at the Carlson School of Management at the University of Minnesota.

Sheehan is also very involved in community service, serving on a variety of boards for nonprofit organizations.

He and his wife, Jeanne, have two sons.
Watch Sheehan’s video 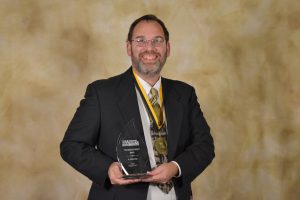 Dr. Jeff Poet
Distinguished Faculty Award
Dr. Jeff Poet, professor of mathematics, joined the Missouri Western faculty in 2002, and helping students succeed has been at the forefront of his career ever since.

In 2006, he teamed with Dr. Todd Eckdahl, professor of biology, and colleagues from Davidson College in North Carolina to guide undergraduate students in synthetic biology research. That collaboration led to the team obtaining three National Science Foundation research grants totaling about $2.3 million and publishing in several prestigious publications.

Dr. Poet earned a Bachelor of Arts in Mathematics from Ottawa University, a Master of Science in Technology and Mathematics Equation from Kansas State University, and a PhD in Algebraic Graph Theory and Combinatorics from the University of Wyoming.

He says the mix of classroom teaching and guiding student research is what makes his job great. “As long as I have students in front of me, I’m happy,” he said.

Dr. Poet and his wife, Laura, have eight children, including two daughters who are alumnae. 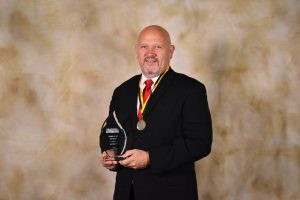 GOLD Award
In 2008, John Klindt ’11 realized that if he wanted to advance his career, he needed to earn a degree. So, at the age of 40, he enrolled at Missouri Western and earned a Bachelor of Science in Electronics Engineering Technology.

Shortly after earning his degree, he began working for FedEx Ground in Kansas City as a Maintenance Service Manager and today is the Facility Maintenance Manager for the company. In that position, Klindt oversees the repair and maintenance of all material handling equipment, buildings and grounds with a staff of 12. He has received numerous awards for his work.

Klindt, from Bethany, Missouri, is very involved in community service, helping groups such as the Children’s Place, Kansas City School for the Blind, United Way and Ronald McDonald House.

“Missouri Western provided me with so many opportunities because of the coursework and the interest the professors took in my progress,” he said.

Klindt and his wife, Kate, have a son and a daughter.
Watch Klindt’s video 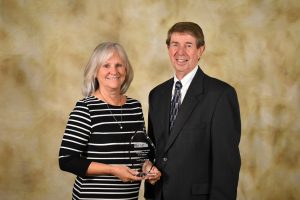 Tom and Patsy ’95 Smith
Herb ’35 and Peggy Iffert Award for Outstanding Service to the University
Tom and Patsy ’95 Smith have served Missouri Western, specifically Missouri Western Athletics, for more than two decades. Tom retired in 2012 as the head men’s basketball coach, a position he held for 25 years, and Patsy retired in 2014 as the Senior Associate Director of Athletics and Senior Woman Administrator after a 20-year career.

In those very visible positions, Tom and Patsy have been outstanding ambassadors for and representatives of  Missouri Western across the country.

When Patsy graduated, she was hired as business manager for athletics and has held many positions for the department over the years, including interim director.

Tom retired as the all-time leader in wins at Missouri Western, closing out a 38-year career as basketball coach with more than 600 wins. As a Griffon, he holds five MIAA regular-season championships, four MIAA postseason championships, 11 NCAA tournament appearances and 12 seasons with 20+ wins.

“Missouri Western has done so much for both of us,” Patsy said. “It’s been the core of our lives. Anytime we can give back, we willingly do that.”
Watch the Smiths’ video 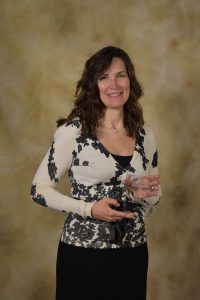 After graduation, Mary Elizabeth (Schmitz) Porter ’99 earned a Doctorate of Pharmacy from University of Missouri-Kansas City in 2004 and has been the Clinical Coordinator at Liberty (Missouri) Hospital for the past 12 years.

Porter, a native of Clarksdale, Missouri, is an active member of several professional associations and likes that she can make a difference in her patients’ lives. As a Missouri Western student, Porter participated in marching band and the symphonic winds, and a study away trip to Mexico, all of which created great memories.

“Missouri Western was a gateway to my future,” she said. “It helped prepare me for pharmacy school and provided me with a solid educational foundation for my pharmacy career.”

She and her husband, Jeff, have one daughter. 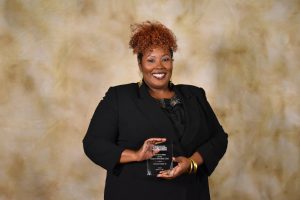 Great Griffon Award
College of Professional Studies
LaShaundra Randolph ’03, a native of Harvey, Illinois, graduated with a degree in criminal justice and worked as a youth specialist at a maximum security facility before deciding she wanted to work in higher education. She earned a master’s in higher education administration from University of Missouri-Kansas City, and today serves as a Project Coordinator for Metropolitan Community College-Penn Valley.

While serving at University of Missouri-Kansas City as a coordinator for student activities, she founded and directed the Kangaroo Food Pantry. In her current position, she works specifically with minority retention initiatives. Randolph has also served in several leadership roles with the National Association for Campus Activities and was recently elected to its board of directors. She also volunteers with the Delta Sigma Theta Sorority.

Randolph is currently working on her Doctorate of Educational Administration/Urban Higher Education emphasis. 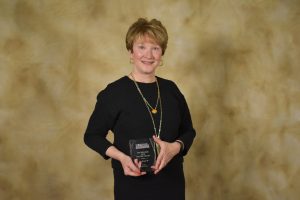 Marquart, a Union Star, Missouri native, earned a Bachelor of Science in Business Administration in Accounting. She was working as a Bank Examiner for the Federal Reserve Bank of Kansas City when Commerce Bank offered her a position as Controller. She held several positions with Commerce Bank in the years since and was named President in January 2014.

“I enjoy the opportunity to help customers realize their goals and mentor employees to reach their potential,” she said of her position.

Marquart is an avid community volunteer. She served on the Missouri Western Foundation Board of Directors, including a term as chair; and currently serves on the Craig School of Business Advisory Council.

Marquart and her husband, Keith, have a son and a daughter. 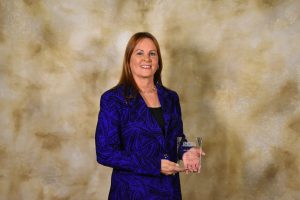 After graduating from Missouri Western, Marrita Black ’75 operated a horse training facility in Gainesville, Texas, where she trained, showed and sold horses from across North America, South America and Japan. Today she is a professional sculptor.

Her commissioned life-size bronze sculptures of quarter horses can be found all over the country, including one on the campus of Oklahoma State University in 2016.

“Often when I’m sculpting I will hear the words of one of the art instructors at Missouri Western – ‘just sculpt what you see, really look at your model,’” she said.

Black, who graduated from high school in Wathena, Kansas, welcomes visitors to her studio and presents workshops at schools in the Gainesville area. She served on the American Quarter Horse Foundation for 15 years.

Her husband is Dr. F. Robert “Bob” Black. “All my kids have four legs,” she says. 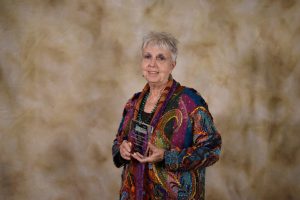 Diane Waddell ’66/’91
Great Griffon Award
School of Nursing and Health Professions
Diane Waddell ’66/’91 is a nurse practitioner at Mosaic Life Care, but she is just as likely to be identified by her passion for environmental advocacy. She serves on numerous national and regional organizations related to environmental sustainability and justice, including the Presbyterians for Earth Care. Waddell has presented at and chaired conferences across the country on issues related to both health care and the environment.

As a nurse practitioner, Diane said she offers a model of health which incorporates openness to yoga, meditation, personal training, reflexology, chiropractic and more. As part of her environmental and church work, she has taken study trips, medical mission trips and social-justice oriented trips across the globe.

She and her husband, Bob, have two daughters. 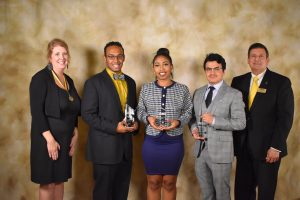 BreAuna Watkins ’17
Student Leadership Award
Clifford Hughes ’55 Award
BreAuna Watkins ’17, from St. Louis, graduated this past May with a Communications major and plans to attend graduate school to become a speech pathologist. Watkins was a great student leader, serving as president of the Black Student Union, as a mentor in the Students of Color Orientation and a resident assistant in the residence halls. In 2015, she was the student recipient of the Drum Major for Justice Award.

Reyhan Wilkinson ’17
Student Leadership Award
Graduating Student of the Year
Reyhan Wilkinson ’17 graduated in May with a Bachelor of Science in Business Administration in Accounting. He is currently a leader trainer at U.S. Bank.

As a student, Wilkinson was involved in several student organization and held leadership positions in several of them. He also served on the Alumni Association Board of Directors as a student.

Nominate someone today!
Nominations for all Alumni Association awards may be submitted year round online at missouriwestern.edu/alumni or you may obtain an application from the Alumni Relations Office, Spratt Hall 106. Along with the nomination form, a letter stating why you believe the person deserves this award must accompany the application. The deadline is March 1 each year. Current members of the Alumni Association Board of Directors are not eligible for nomination.