Alumna at the helm of Eureka College

Alumna at the helm of Eureka College

Dr. Jamel Santa Cruze Wright ’00 was named the 27th president of Eureka College in July 2017. She had been serving as interim president since July 1, 2016. 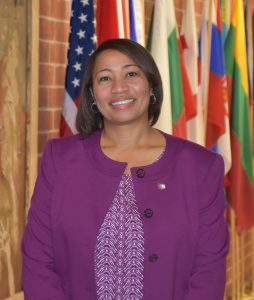 Dr. Wright, a native of St. Louis, graduated from Missouri Western with a Bachelor of Science in Communication Studies, and within four years, earned her master’s and doctorate degrees from the University of Kansas. She was Missouri Western’s Commencement speaker at its Spring 2004 ceremony.

In an article in the Spring 2005 issue of the Missouri Western Magazine, Dr. Wright said that, although she didn’t appreciate it at the time, Missouri Western prepared her well for her academic and professional future.

“The professors really crafted the experience for us. Looking back now, the rigor in that program is definitely needed and appreciated,” she said. “It wasn’t until I graduated that I realized the value of being a graduate of an institution like Missouri Western.”

Dr. Wright had several years of experience in higher education as an administrator and full-time faculty member when she joined Eureka in 2014 as the college’s first chief diversity officer. She was also hired as vice president for strategic and diversity initiatives.

In her interim president role, Eureka College saw growth within its mission of furthering excellence and opportunities in learning, service and leadership, according to a press release from Eureka College. Dr. Wright introduced The Uniquely Eureka Advantage, a program offering innovative commitments to incoming students including graduation in four years, a four-year tuition freeze, an experiential learning award to all new students and opportunities to study abroad. Dr. Wright collaborated with the faculty to design a new curriculum to better prepare students for rewarding careers and meaningful lives.

Additionally, she presided over one of the most successful accreditation processes in the history of the college. Under Dr. Wright’s leadership, the college also implemented improvements to academic and athletic facilities.

Eureka College, chartered in 1855 and founded by abolitionists, was the first in Illinois and the third in the nation to admit men and women on an equal basis and is the smallest college to graduate a future President of the United States (Ronald Reagan).

According to our records, Dr. Jamel Santa Cruze Wright ’00 is the third higher education president to claim Missouri Western as their alma mater. When Dr. Wright became president of Eureka College last summer, she joined Dr. Bernie Patterson ’73 who has served as president of University of Wisconsin-Stevens Point since 2010; and Richard Durst ’71, who was president of Baldwin-Wallace University in Berea, Ohio 2006-12.