When Brent Rosenauer graduates this month, he is leaving behind a legacy of community service that he hopes will continue long after his college days. 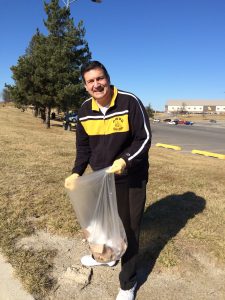 Last fall, he created GriffsGiveBack, an office on campus that serves as a center point for volunteering in the community and well, giving back. Shana Meyer, vice president of Student Affairs, like his idea so much she gave him office space. The Student Government Association liked his idea so much, the senators decided to fund him.

In the short time he’s been open, Rosenauer got eight Planet Aid bins on campus for clothing donations, and he held a campus cleanup day in February (50 people showed up to help). He’s also held meetings with Noyes Home and United Way staff to help address their volunteer needs. He is also working on a recycling initiative for campus.

“There are a lot of motivated people who want to see this office succeed,” he said. 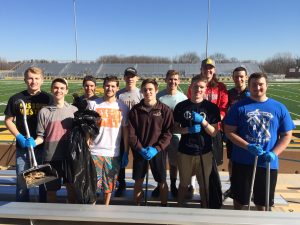 Rosenauer said he came to Missouri Western with the idea of getting his general studies credits in and then transferring, but once he became involved on campus, he realized he didn’t want to leave. The convergent media major spent three years working on the Griffon News, the student newspaper.

“Missouri Western has more opportunities than any other university has to offer. I’ve had a lot of big ideas, and there has never been a professor or administrator that told me no.”

And what is going to happen when he graduates this month? Rosenauer says he isn’t worried about the office because a lot of students have expressed interest in taking the position on after he leaves.

Since he started this initiative, he is leaning toward a career in nonprofits.

“I want to change the world in a positive way,” he says. “That’s what I want to do with my life.”