Challenging. Adventurous. Fun. And outdoors. That’s what Melissa Cairns ’16 was looking for in an internship this past summer. She found all that and more when she was hired as a Class V whitewater rafting guide at Ace Adventure Resort in West Virginia.

For those not familiar with whitewater rapids designations, there are six classes, and the higher the number, the wilder the ride. According to americanwhitewater.org, Class V, which Cairns guided and was the highest level offered by Ace, is “extremely long, obstructed, or very violent rapids which expose a paddler to added risk. Drops may contain large, unavoidable waves and holes or steep, congested chutes with complex, demanding routes. Rapids may continue for long distances between pools, demanding a high level of fitness.”

Cairns wouldn’t argue with that description. One of the most harrowing experiences for her, she said, was when a raft flipped at a Class V rapid. “We had kids all 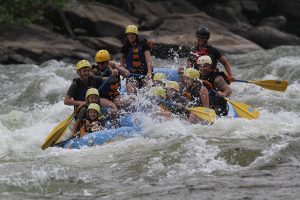 over the place. I was able to pull one kid back to the raft, and three other guides were throwing ropes to get other people out of the water,” Cairns said. “I ended up standing on a rock holding a raft of three people from going downstream into a feature we call ‘meat grinder.’”

In an internship like hers, she said, you have to be someone who can stay calm and level-headed in a situation that requires you to be. That situation required it, and she was.

“The internship gave me a lot of room to try new things and step outside my comfort zone,” she said. “I think what I enjoyed most was the challenge. Every day was different.”

Cairns, from Tauranga, New Zealand, came to Missouri Western in 2012 to play volleyball because she liked the size of the school and the city. She loved her experience as a student athlete and said it taught her a lot of life skills, especially time management.

“I also got to be with a team that was as close as a family, and for me that was important. Living so far from my own home, I was glad that I had a team there to support me.” Cairns played volleyball for three years, but decided to give it up her senior year because of several injuries.

She started out as a biology major, tried philosophy for a while, and then found her niche in recreation sport management.

That degree, Cairns says, gave her an understanding of what is really needed to effectively run a business, including all the planning and organizing that goes into it. She also completed an internship as intramural games manager for Missouri Western’s recreation program.

Since she enjoyed both internships, she said her immediate career plans included looking for a job with high adventure, but eventually she’d like to run a college recreation program.

“I intend to move into a management position sometime, but I do enjoy working as a guide.

Rafting through white water is dangerous because the water is powerful, but it can be the best time of your life.”