When Missouri Western received university designation from the state Legislature in 2005, it was given the green light to offer graduate programs, and this past fall marked the 10th year of the University’s offering master’s programs.

Dr. Ben Caldwell, who became dean of the Graduate School in 2012, said that in the past 10 years, both enrollment numbers and program offerings have grown every year.

First master’s degrees
The first post-bachelor’s degree was awarded at the May 2007 commencement ceremony, when Deb Schwebach ’74/’07 received a Graduate Certificate in the Teaching of Writing. The certificate had been offered on campus for several years from Northwest Missouri State University through Missouri Western’s Prairie Lands Writing Project, but Schwebach was the first to earn the certificate from Missouri Western. 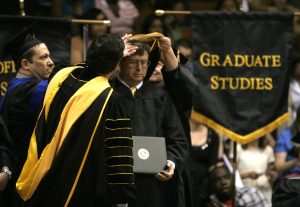 Jeffries, who was a nontraditional student, realized that earning a master’s degree would help her 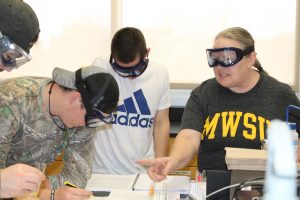 advance in her career more quickly, so she immediately enrolled in the new chemistry   graduate program after she earned her bachelor’s in chemistry. She completed an internship in the Christopher S. “Kit” Bond Science and Technology Center on campus, and was hired as the laboratory manager after she earned her master’s. Last year, she began teaching full-time in the Department of Chemistry.

“A lot of universities don’t have programs like Missouri Western’s that are hands on,” Jeffries said. “The applied nature of the program really puts you ahead in your career by several years. It gives you the edge to get you to the next level.”

Kountz, a validation senior specialist at Boehringer Ingelheim Vetmedica Inc. (BIVI), earned a bachelor’s degree in chemistry from Missouri Western in 2000. He said he had always wanted to pursue a master’s degree, so when the University began offering the Master of Applied Science in his field, he immediately enrolled.

“The courses were very beneficial in regards to seeing an overall picture from research and development, to production, to quality control and to the safety stages,” he said. “Receiving my master’s provided me with knowledge that opened new opportunities in my career.”

He said he received a promotion at BIVI while he was earning his master’s degree.

Nursing programs fill needs
The Department of Nursing and Allied Health offers two master’s programs and one graduate certificate. The Master of Science in Nursing – Health Care Leadership began in 2012, and a Master of Science in Nursing – Nurse Educator and Nurse Educator graduate certificate began in 2014.

Dr. Carolyn Brose, director of the graduate programs for nursing, said the development of its master-level programs was driven by the health care needs of the region. She said they developed the MSN’s Nurse Educator option and Nurse Educator graduate certificate because of the critical need for nurse educators not only in this region, but across the country.

“It’s important that we work to sustain and build a workforce for nursing,” Dr. Brose said.

Missouri Western also began offering its nursing graduate programs in the Kansas City area at the request of hospitals there. In the spring of 2015, a cohort for the MSN program began at Liberty Hospital. The classes, Dr. Brose said, are a combination of faculty teaching on site alternating with video conferencing.

“This approach has truly opened the door for metropolitan-based students who are challenged both by time and distance to attend classes on campus,” she said.

Last year, Missouri Western was approached by North Kansas City Hospital with a request to provide a master’s program there, and they plan to begin the courses this spring, Dr. Brose said.

Education programs
Like the nursing programs, the graduate programs in the Department of Education were developed to address area needs in the field.

Since 2010, the department has offered a Master of Science in Assessment with options in TESOL (Teaching English to Speakers of Other Languages) and Autism Spectrum Disorders, and two graduate certificates with the same options.

“Both areas are identified as critical areas of need,” said Dr. Susan Bashinski, director of the graduate programs for the department. “English language learners are one of the fastest growing populations in the United States.”

She added that the department’s programs also offer a great opportunity for teachers to advance their education, which usually leads to higher salaries in most districts.

Dr. Bashinski said Missouri Western faculty stay abreast of new developments in the ever-evolving field of education, and the programs will continue to grow and change to meet the demands of school districts.

The graduate programs in the Department of Education are also 100% online, and their students are from across the United States and foreign countries, including recent graduates from Jamaica and South Korea. 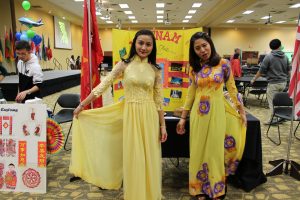 Beyond 10
So what’s ahead for Missouri Western’s Graduate School as it moves into its second decade?

In the near future, a new MBA program will begin this fall, in response to community requests and input.

Beyond that, Dr. Caldwell said plans are to continue to grow the enrollment, both nationally and internationally, and continue to develop programs that fit the needs of the area.

“We have always focused on serving the local industry, and that will not change,” Dr. Caldwell said. “We try to fill needs in the area and will continue to listen to people in local and regional businesses.”

He said the Graduate School will also look at academic departments on campus that do not currently offer graduate programs, and explore if there is a need for programs in those areas.