Tips for a happy retirement

Claudia (Hinton) James ’89 says when you’re thinking about retirement and how you will fill your days, think about Steven Covey, known for his bestseller, “Seven Habits of Highly Effective People.” The author has also written about how to determine your purpose in life and how to create a personal mission statement.

James, who is a presenter/curriculum developer and owner of James Educational Meetings and Seminars, Inc., says retirement should be an extension of your personal mission statement, “an expression of who you are. You need to figure out your heart’s desire.”

Like many people, she had to think about her retirement sooner than she expected when the recession caused a downturn for her business. James says she wasn’t ready to retire, and she went through a slump.

“I was forced into looking at myself and my life and what I wanted to do,” she said. “I thought, ‘What do I want the next 10 years to look like?’”

She decided to semi-retire and start working on her bucket list, which includes learning more about photography, traveling with People to People and traveling in general, and volunteering with civic groups. “I want to utilize my skills to give back.”

James notes that “making the most of retirement” looks different for each person.

“It all comes back to the continuity of life. People need a personal mission and purpose,” she says. “You have to know yourself and position yourself throughout your life based on who you are. I’d definitely encourage people to take that spiritual journey that Covey suggests.”

Editor’s note: Shortly after the centennial issue of the Missouri Western Magazine came out in January 2015, Galen Clark ’54, sent me an email: “When I turned to page three my eyes were immediately drawn to the photo at the lower left. I never knew that the Junior College had a ukulele band. When I showed the photo to my wife she remarked, ‘That’s just like your ukulele banjo.’ If you can find out the date or any other information about the photo on page three, I would like to read about it.” 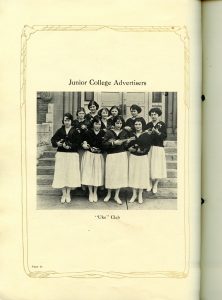 The photo was from the 1921 yearbook, and the caption information was fairly slim: “Uke Club.” I emailed Clark back and told him I couldn’t find any more information about it. Shortly after, I received the following article from him:

“The Ukulele Club photo in the centennial issue caught my eye. Several of the young women were holding ukulele banjos – and I have one! And I play it daily. For several years I have played in senior citizen’s ukulele groups and often carry a ukulele with me when I attend church meetings. My dentist also plays and she attends the same congregation my wife and I do.  We discovered a deacon in the church also plays. Approaching our pastor, we asked for a room where we could practice and invite others to join us. We pitched it as a fellowship opportunity and a learning experience. Our pastor jumped on the suggestion and we found the church’s music director wanted us to form a group.

At our first meeting we had people who didn’t have a ukulele but who wanted to learn. And people keep showing up to join us. I’m the only retiree. Besides the dentist we have a CPA, a school teacher, a church elder, a church trustee, choir members and a teenager.

Finally, several other members of the group are so captivated by my little ukulele banjo that they are acquiring one, too!”

Galen added that he retired in 1998 and moved to Texas when his wife, Diane, got a new job there. He did some consulting work until she retired and then they both did consulting together for a few years.

“I fiddle some (every Sunday afternoon at a local venue IF I want) and play in the local senior citizens ukulele group, as well as at the church,” Galen said. “I volunteer one morning a week in the church office doing whatever the administrative assistant needs done, and I lead chapel for the Parents Day Out kids.”

Dr. Jerry Aschermann, professor emeritus who taught in the Department of Education from 1971 to 2004, sent the following about his interesting retirement activity:

“What do retired professors do other than sitting around reading books? For several years, I was busy gardening and downsizing that included moving from St. Joseph to Union, Kentucky (15 minutes from downtown Cincinnati). 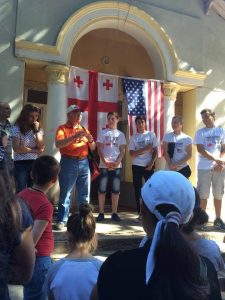 In 2012, an opportunity was presented by the McLain Association for Children, an organization that has a number and variety of programs in the Republic of Georgia (macgeorgia.org).

I traveled to Dzevri, Georgia in 2013, 2014, and 2015, and plan to return this fall, helping English teachers teach English and offering teacher education assistance. Georgia wants to join Western Europe and the U.S., but to do so they need to discard their Soviet/Russian occupation of 70 years and the learning of Russian. Learning English is a necessity.

A problem exists because the teachers of English only know ‘book English,’ and many do not know the correct pronunciation of English words nor everyday conversational English. So, my task has been to work with students and teachers in learning verbal English.”

Lorrie Beck ’81 spent her entire career serving others, and that didn’t change when she retired in 2014.

After graduating with a Bachelor of Science in Leisure Management – Outdoor Recreation, Beck spent two years as a Peace Corps volunteer in Lesotho, Africa. Combined with an internship while a student, her volunteerism helped her secure a job with the U.S. Army Corps of Engineers that turned into a three-decade public service career.

In 1993, she began working for the U.S. Fish and Wildlife Service, and was stationed in Missouri, Alaska, Kansas and Colorado throughout her career. She retired in 2014 to care for her mother, Shirley Beck ’71.

One of the main recipients of Lorrie’s volunteer time has been Habitat for Humanity. In 1997, she was driving to Florida and decided to visit a demonstration site for Habitat for Humanity in Americus, Georgia. Since then, she has traveled to South Africa, India, Mongolia, Thailand, Haiti, Peru and all over the U.S.to work on Habitat homes, one week at a time.

“When I’d be talking to kids in my job about nature, we’d talk about habitats,” she said. “I was trying to save animal habitats and I realized that habitats for humans were important, too. Folks don’t do well without a decent place to live.”

She currently lives in Wichita, Kansas and serves on its Habitat for Humanity Board of Directors.

This past summer, Lorrie volunteered three weeks for the U.S. Fish and Wildlife Service in Washington, D.C., and also worked a week with the Carter Work Project in Memphis, Tennessee, which is part of Habitat for Humanity.

“I always try to have my vacations include a component of giving back,” she said.

When she was growing up, Lorrie’s father was in the military so the family moved quite a bit. When it was time to go to college, the family was living in Gower, Missouri. Lorrie enrolled at Missouri Western, but she took some time off after her first year. She returned when her sister, Denise Beck ’81, started attending. Denise graduated with an accounting degree and recently retired after a 34-year career with DuPont. She assists Lorrie in the care of their mother.

“I really had a great time at Missouri Western,” said Lorrie, who played softball, basketball and volleyball. “I loved the coaches. We were a close-knit family.”