Missouri Western at Your Service

Missouri Western at Your Service

Since its earliest beginnings, Missouri Western has been a great community partner when it comes to volunteering. Whether it’s students, alumni or employees, community service is a cornerstone of Missouri Western’s mission.

Appreciating music and community service go hand in hand for one organization on campus. Sigma Alpha Iota, an international music fraternity, made sure that community service was an integral part of their mission last year. For their efforts, they were awarded the 2016 Excellence in Philanthropy Award from the MWSU Foundation. The group’s advisor, Carol Hare, also received the Outstanding Advisor 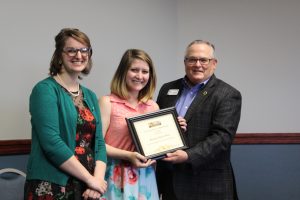 Members of Sigma Alpha Iota receive the 2016 Philanthropy Award from Pat Dillon, a member of the MWSU Foundation Board of Directors.

award from the Student Government Association.

“Our national objective is ‘service through music and community,’ and we thought it was important to branch out into the community,” said Maddie Marx, an elementary education major from Kansas City, Missouri who served as president of the fraternity last year.

Last fall, the group met and decided to add a service requirement to their goals, and each of the 10 members was required to complete five hours of community service per semester.

“We really didn’t need to make it a requirement,” Marx said. “We all like to do community service.”

By the end of the academic year, the group had logged 199 service hours volunteering at the Department of Music’s Madrigal Feaste, visiting nursing homes, working in the campus food pantry, ushering at theatre events and helping out at a Girl Scout merit badge day. The women also raised funds for their national philanthropy, People to People.

“It’s good for college students to get out in the community and do service,” said Marissa Sunderland, a psychology major from Kearney, Missouri who is currently serving as the group’s president. “It makes you feel like you accomplish something, and it’s so rewarding.”

The fraternity also held a 35th anniversary party to celebrate when it started on campus, and they learned about their history from alumni, some charter members, who attended.

An alumna who is also a Missouri Western employee spent two days in Washington, D.C. this past spring advocating for those with Down Syndrome. 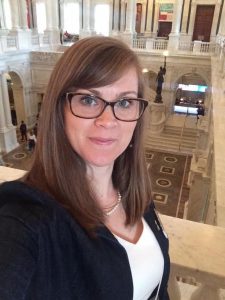 Tara Stoll ’00, the video communications producer in the Instructional Media Center, was invited to be part of a group from the Down Syndrome Guild of Greater Kansas City, an organization that provides support and resources for individuals with Down Syndrome and their families. She has been a member and a volunteer since her daughter, Olivia, was born with Down Syndrome in 2008.    “I felt empowered. I felt like I was making a difference for my family,” Stoll said. The energy in that city is amazing.”

The trip was part of the annual National Down Syndrome Society’s Buddy Walk on Washington Advocacy Conference. On the first day, Stoll and others from across the United States met with the national group to learn about the legislative agenda and asks for this year. On the second day, she visited legislators’ offices.

“It was great because it was national. Every state has its own issues, but we can all come together and agree on the things that can help,” she said.

Staff members in the offices she visited were friendly and supportive of her cause, she said.

The advocacy focus this year was to ask legislators to cosponsor the bipartisan ABLE to Work Act to increase the amount of yearly assets that a disabled person receiving federal benefits and is employed can save in an ABLE account. The ABLE (Achieving a Better Life Experience) Act that was passed in 2014 made a tax-free savings account available to individuals with disabilities, and the ABLE to Work Act will raise the annual contribution limit for those who work and earn an income.

Stoll said she also spent time educating staff in the offices about Down Syndrome.

“We try to squash those old stereotypes about what Down Syndrome means,” Stoll said. “We’re just trying to live our lives like everyone else. Our kids might be different, but they deserve a chance at independence.”

She would love to return for the Buddy Walk on Washington next year and advocate for those with Down Syndome.

“I have endless energy when it comes to advocating for my kids.”

When Cayetana Maristela ’09 left her hometown of Pililla in the province of Rizal, Philippines in 1974, the city had no library. Every time she visited since, she kept thinking she would see a library. Finally, in 2011, she decided that if she wanted a library there, she would have to build it herself. And that’s just what she did. 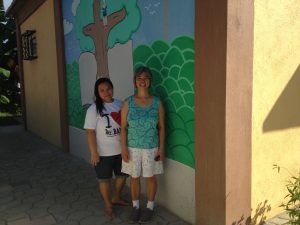 Cayetana Maristela ’09, front, with her niece at the new library Maristela helped build.

She took a sabbatical from her job and returned to Pililla in July 2014. In February 2015, her long-time dream of a library for the children of Pililla came true, thanks to Maristela, her brother, her brother’s friends who helped build it, and many, many people who donated books. (The children learn English in their schools, so the books are written in English.)

Maristela graduated from Missouri Western with a Graduate Certificate in the Teaching of Writing and is a teacher for English language learners at Indian Creek and Redbridge elementary schools in Kansas City, Missouri.

She has been shipping books that were donated to her relatives in Pililla for the past five years. The books were donated by families from her schools and her fellow parishioners at St. Francis Xavier Parish in St. Joseph, Missouri. She also received funding from her church to pay to ship several boxes of the books.

Her family still owned property in Pililla, which has a population of approximately 60,000. So at first, Maristela thought they could use one of the buildings on her family’s property for a library. However, her brother, an architectural engineer in Indiana, deemed the building unsafe. It was demolished, and a new building for the library was built on the site, thanks to funding from Maristela and her brother.

The property offers room for children to run, and there is even a small kitchen so they can serve snacks to those who visit.  Also, the one-story library was built with the idea that a second floor could be added in the future. Hopefully, in the near future, she says.

Currently, Maristela’s cousin and her niece run the library, holding story hour, arts and crafts, and tutoring every day when school is out for the summer, March to early June.

As a long-time teacher, Maristela knows the importance of books and the value of reading, and she couldn’t rest until her hometown had a library. And if children don’t return a book, that’s okay, she says. “I think they probably needed that book.”

This past July, Maristela returned to Pililla to make sure things are going well at the library. She says she would like to obtain funding to hire someone to cook healthy snacks or a light lunch, and other needs vary: sometimes she needs books, sometimes she needs funds to ship the books. Maristela says she would love to see volunteers work in the library as part of a mission trip.

But no matter what, thanks to Cayetana Maristela, Pililla now has a library.