This past summer, elementary education major Amanda Harris thought it would be great if she could work with children and practice what she was learning in her math methods class, but the elementary schools’ summer school schedule didn’t line up with the Missouri Western class. As a foster parent of five, Harris knows how children who don’t understand a math lesson feel and the peril of falling behind in math. 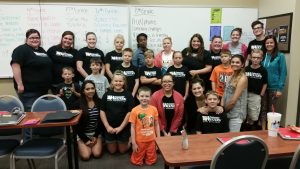 “I know a lot of kids are behind in math, and I thought we should do a math camp,” said Harris, who is earning her degree online and at classes at Missouri Western’s Kansas City Northland location. Her professor, Charlotte Foster, thought it was a great idea and asked her to coordinate it. Harris readily agreed.

She created flyers and distributed them to area libraries and was happy with the response – 19 children from kindergarten to sixth-grade, including six home-schooled children, enrolled in the free math camp that was held June 1-30 at the Northland location.

Harris, with help from fellow student Cristina Contreras, organized and planned the program for each day. Harris purchased one of the “necessities” – snacks – and Foster agreed to purchase the second “necessity” – t-shirts.

The Missouri Western course was three hours a day Monday through Friday in June, and the elementary students attended the last 90 minutes every day. The young children worked on math problems and received one-on-one tutoring from the college students. The first day Harris planned a mini-assessment for each student, and on subsequent days, campers reviewed what they had learned in the past year and worked on the math skills they will learn in the coming year. 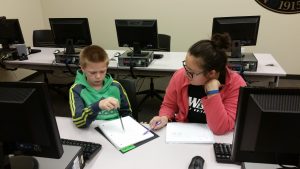 Harris said they received great feedback from both the parents and children. Some of the parents said they didn’t really want to sign their children up for summer school because they were only behind in math, so they really appreciated the exclusive focus on math skills.

“The kids were excited and the parents were thankful,” Harris said.

She said she really benefited from the camp, as well. Going into the methods course, she wasn’t comfortable explaining some of the math concepts to the older elementary students. But by the end of the camp, she had gained a lot of confidence from working with students at all levels.

When Harris advertised the camp for June 1-30, she didn’t realize the college course ended June 23. But she still held it until the 30th, planning some extra fun activities and ice cream for the last week.

“I’m so glad it turned out well,” she said. “It was better than I imagined. I hope it will continue.”