When Adrienne Collins ’14 saw a notice last fall about an opportunity that included the words “international travel,” “bucket list” and “performing,” she knew she had to pursue it. Answering the call led her to being featured on a reality show and performing center stage at the Strasbourg Opera House in Strasbourg, France last April. 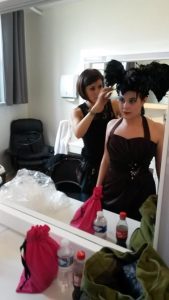 Adrienne Collins ’14 at the Strasbourg Opera House in France.

“This was an unbelievable experience,” said Collins, who graduated with a music degree. “It was without a doubt a dream come true.”

The notice she saw was from DEFY Media, a production company headquartered in New York City. According to its website, DEFY Media is the top creator, distributor and owner of millennial-focused digital content. The company was seeking submissions for an original series it was creating, “100 Things,” to air later this year on go90, Verizon’s mobile platform; and YouTube. They were looking for people with a “unique #1 bucket list item” and a compelling story to go with it. Collins knew immediately what she wanted to write about on her application.

As a freshman at Missouri Western, Collins, from St. Joseph, had performed in Maury Yeston’s “Phantom” as Christine, the lead. In the opera, Christine had a humble upbringing and her father was deceased.

“Music is Christine’s way of honoring and remembering her dad, and I feel a close connection with that story,” Collins said.

Her father passed away when she was 13 years old. “It’s been difficult, he was my #1 fan,” she said. “Not having him here makes me work twice as hard, and I honor him when I pursue my dreams. That’s what he would have wanted me to do.”

DEFY liked her story and interviewed her several times on the phone last fall. In February, they told her to get her passport ready to fly to France in April. They had selected 26 people for the show out of nearly 1,000 applications, and Collins’ was the 20th episode.

The Strasbourg Opera House in France.

Her application noted that she wanted to perform at the Palais Garnier, the opera house in Paris that was the setting for Gaston Leroux’s 1910 novel, “Phantom of the Opera.” When that wasn’t available, DEFY procured the use of the Strasbourg Opera House in Strasbourg, France, for her performance.

Collins arrived on April 12, and the episode was filmed April 15. The opera house provided a headdress for her, a surprise makeover and a tour, all while the cameras were rolling. The show is hosted by Sebastian Terry, who wrote the 2009 book, “100 Things” when he was 27 years old.

“It made me feel like a queen for the day,” she said. “Anything that I hadn’t thought of, they did, and it made it the best day ever.”

The highlight, of course was performing “Queen of the Night’s Vengeance” aria from Mozart’s “The Magic Flute,” which Collins performed in on campus in 2013.

“A lot of the crew had never heard opera before, and they loved it,” she said. “It’s kind of a show-offy piece.”

Collins called the Strasbourg performance “liberating. I felt like I could spread my wings and soar.” She hopes the exposure of her performance when the episode airs will lead to more acting and singing opportunities for her.

After her filming, the production company, which also owns the Made Man channel, was heading to Paris to film another episode of “100 Things,” and Collins had been invited to travel with them. She spent three days touring Paris before heading home.

Collins, who had never before traveled overseas, said she would not have explored the opportunity to perform in France had it not been for her four semesters of French at Missouri Western. Her professors, Dr. Susie Hennessy, professor of French and department chair, and Claudine Evans, instructor of French, gave her tips on navigating Paris and suggestions on what she should see.

Collins also credits Dr. Susan Carter, professor of music and director of vocal studies, for the training and confidence to sing opera. “I would not have done it without Dr. Carter. This experience would not have been possible without the support I receive from my alma mater.

“It was like living a dream. I look back at it now and think, ‘Did that really happen?’ It was such an enriching, life-giving trip.”

This article is dedicated to the memory of David Benz and Dr. Joseph Friedman ’39.