For Dr. Yevgeniy Kondratenko ’03, his experience in graduate school at the University of Illinois at Urbana-Champaign made him realize that he had received a great undergraduate education in the 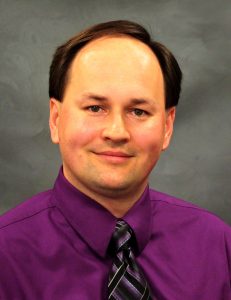 Department of Chemistry at Missouri Western.

After graduation, Dr. Kondratenko was accepted into the PhD program in chemical engineering at the University of Illinois, which was ranked in the top 10 in the nation. He said he had to catch up a little because his undergraduate degree was in chemistry and the graduate degree was in chemical engineering. However, his hands-on lab skills made up for the slight lag.
“It was interesting to watch my peers from MIT, Caltech, Cornell, Stanford, and other high-ranking universities. They were definitely ahead of me in engineering theory, but they had to catch up in practical laboratory experience,” Dr. Kondratenko said. “My time in Illinois definitely highlighted the strength of undergraduate education at Missouri Western. It made me appreciate all the extracurricular activities and all the laboratory work that I was able to do there.”

At the University of Illinois, he was named Outstanding Teaching Assistant and Outstanding Graduate Research Mentor. He also presented his research at the annual graduate research symposiums of the department and won for three consecutive years.

Today, he is a process engineering subject matter expert at BP America – BP U.S. L48 Onshore in Houston. He started his career at BP as a process/facilities engineer after earning his doctorate in chemical engineering from the University of Illinois in 2009. Dr. Kondratenko noted that his job responsibilities fall into two major categories: design and troubleshooting of oil and gas equipment.

“While oil and gas has been produced for more than a century, it is still very challenging,” he said. “Just because everything works great today doesn’t mean that a year from now everything will work just as well. Like a deflating balloon, the well is a dynamic system. Flow of fluids from the well changes all the time and we have to constantly adjust the equipment.”

That, he says, is what keeps his job interesting and challenging. “I enjoy the fact that I always have to look ahead and never solely rely on my existing knowledge and current skills. My job definitely requires embracing a lifelong learning approach.”

He says he still uses the knowledge he learned at Missouri Western in his job, even pulling his undergraduate textbooks off the shelf at times to help solve a problem.

Dr. Kondratenko was born and raised in Belarus, a small country between Russia and Poland and north of Ukraine and spent his free time exploring nearby parks and forests with his parents, Vladimir and Yelena Kondratenko. This experience sparked his interest in learning more about science and nature.

“My mom always loved to read, and I was blessed with a large library of books. In our book collection we had an encyclopedia set that covered broad areas of science and engineering. I became fascinated with physical sciences and spent countless hours reading and learning.”

Toward the end of high school, he met an American family, Rick and Patsy Hartman from Dekalb, Missouri, through the Baptist Association. They helped him come to the United States, and he enrolled at Missouri Western.

“I always felt a part of their family,” Dr. Kondratenko said. “I can definitely say that family is not limited by the family tree.”

Dr. Kondratenko began at Missouri Western as a biology major, thinking he wanted to be a medical doctor, but he quickly realized that he really loved the research environment, and he switched to chemistry instead.

“The chemistry department had excellent equipment and small classes,” he said. “The combination of small group learning, direct access to professors for help and an abundance of hands-on practical experience definitely helped me develop very strong scientific skills. Most semesters I was doing research projects with different professors trying to get a broad exposure to different areas of chemistry.”

As a student, Dr. Kondratenko also presented his research at a number of regional and national conferences, and he completed two summer research internships at two different universities. He also earned minors in physics, math and business while at Missouri Western.
All those experiences, he says, helped him solidify his interest in pursuing a PhD in chemical engineering.

“The combination of research, Alchemist Club events, and 18 credit hours during most semesters definitely provided an excellent and diverse amount of activities,” Dr. Kondratenko said. “Visiting Baptist Student Union and attending Honors Program events were two nonscientific activities that I enjoyed on top of my chemical endeavors. I can definitely say I had a blast at Missouri Western!”

Amidst classes, labs and outside activities, Dr. Kondratenko met his wife, Lanell, at Missouri Western, and they married shortly before graduation. They have two children, London and Justin.

When he’s in the area, Dr. Kondratenko tries to visit campus. He is impressed with all the changes, especially to the science and math facilities.

“I thought the science and math departments were in great shape when I was at Missouri Western, but now they are absolutely phenomenal.”