In its first year with a full-time director, the parliamentary debate program has made a name for itself both statewide and nationally, thanks to two debaters.

When Jason Edgar, communication studies instructor, was hired as the program’s coach last fall, he inherited the parliamentary debate team of Chris Miles and Mike Smith, juniors from Independence, Missouri. The men had debated in high school and at Kansas City, Kansas Community College before they both transferred to Missouri Western and became a team. 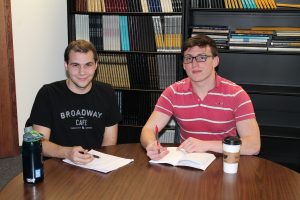 This past year, they were ranked second in Missouri and 18th nationwide, holding that place for more than 15 tournaments. For their efforts, Miles and Smith received a first-round bid to the National Parliamentary Tournament of Excellence in March, where they advanced to the Sweet 16.

“Good debaters have a strong dedication to being up-to-date with current events and being a determined reader of philosophy, and they have to be really good at critical thinking.” Edgar said. He noted that along with possessing those traits, Miles and Smith, longtime friends, excel at working together as a team.

Miles, with a double major of history and communications, wants to continue his education in graduate school and eventually coach debate. Smith, a philosophy major, plans to attend law school after he graduates.

“Debate is unique to other academic challenges,” Miles said. “It’s very competitive and operates like a game. It’s more like a chess game of words.”

Parliamentary debaters don’t know their topic or which side they will argue until they arrive at the competition, and then they only have 15 minutes to prepare. Debate topics in the past year, Edgar said, have included genetically modified trees, tax plans of the presidential candidates, how to deter ISIS and space exploration.

Last fall, along with accolades for Miles and Smith, Madison Lantz was named Top Speaker in a novice parliamentary debate at Webster University in St. Louis. And in February 2016, the team of Miles and Casey Huffman posted an undefeated 10 straight matches and were named the 2016 State Champions in parliamentary debate. Edgar was named Coach of the Year at the state event, as well.

Edgar, who was a speech instructor and director of forensics at Crowder Community College in Neosho, Missouri for six years before coming to Missouri Western, focused on debate for his first semester at Missouri Western since that was the strongest aspect of the program, but a speech student joined the program in the spring semester. Edgar is recruiting for both debate and speech for this fall, and he judges at many high school events so he can tell students about Missouri Western’s program. The University offers scholarships for both speech and debate.

The program hosted the Golden Griffon Invitational, a high school speech contest and student congress, on campus in February, and Missouri Western students and employees served as judges.