Kay-lynne Taylor became the director of the Career Development Center in the fall of 2013. After she met with several students, she said her first priority became very clear.

“Every student I spoke with didn’t know this office existed, so the first step was making sure we had a presence on campus,” Taylor said.

In the ensuing months since she arrived, she has indeed made the center more well known, and has launched several initiatives to reach the students and make sure they benefit from the center and its resources.

One of Taylor’s first tasks was expanding the GriffonLink website and increasing its usage. She increased the number of employers on the site, along with growing the number of students using the site. When Taylor was hired, about 45 students were utilizing the resources on the website. Last semester, more than 3,500 had accessed it.

The website is now packed with career advice, including videos titled “Interview-BEFORE,” “The Elevator Pitch,” and “Make Your Resume POP;” resume templates and a link to 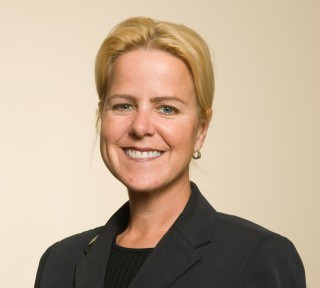 Her next steps were launching two programs – one for student employees and one to help students with career planning.

E3 – Exemplary Employee Experience – was created to improve the experience of the more than 400 student employees on campus. The program included training student employee supervisors and creating a manual for them; and getting them familiar with GriffonLink. E3 worked with the three offices that manage the student employment areas – Human Resources, the Business Office and the Financial Aid Office – to improve services for students.

“Student employment is an important part of the learning experience at Missouri Western,” Taylor said. “We need to make sure we are offering students a meaningful employment experience, fostering career readiness and developing the skills they will need in the workforce.”

In the spring of 2015, Taylor launched her second program, SPARTA (Student Professional and Academic Retention Tracking Assessment). The program consisted of three, one-on-one, one-hour career coaching sessions with Taylor. By the end of the three sessions, participants  created a resume, cover letter and elevator speech, and all were critiqued by Taylor. SPARTA, she said, helps students narrow their focus, explore careers and create an individualized career plan. Taylor also makes sure students are aware of all the campus resources regarding academic success. In the fall semester, 77 students participated.

One of those students, Victoria Byerley ’15, said the program helped her think about what she really wanted career-wise, and helped her decide to try out for a professional internship at Disney World (see article below).

“Kay-lynne is a great resource; she is wonderful,” Byerley said.

“SPARTA helps students have forethought on how to manage their careers,” Taylor said. “We discuss a number of topics, but the focus is on the student. I see light bulbs go off every day.”

The center also offers resume boot camps and workshops on how to prepare for internships, including mock interviews; and helping students prepare for career fairs. Additionally, the students who work in the center are trained to serve as career mentors and help review other students’ resumes.

In the past year, Taylor also changed the career fair format. Rather than have all-majors career fairs, she changed the fairs to major/discipline specific. Missouri Western will now host seven career fairs throughout the year in different focus areas.

“We want to make sure we are telling all our students what we need to be telling them about the career world. People are hiring, and students have to be prepared,” Taylor said. “We want to embed career planning in everything we do for the students.”

Working Griffs
Brett McKnight worked his way through college when he was a student, and now he’s helping Missouri Western students who are on the same road. Since he arrived on campus almost two years ago, the student employment coordinator in the Career Development Center helps students find jobs, keep jobs, enjoy their jobs and learn skills that will help them in their careers. 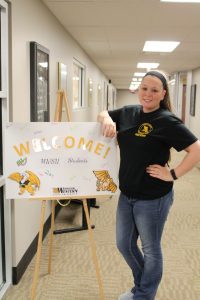 “National studies have shown that students who work on campus have higher success and persistence rates,” he said, adding that the ideal is 10-15 hours per week.

Because working on campus makes a big difference in college experiences, the Career Development Center launched E3 – Exemplary Employee Experience – last year to ensure that students have a good work experience. From that initiative, a student employment committee was formed to address issues as they occur.

Missouri Western student employees are important, McKnight said. He noted that for the 2014-15 fiscal year, the University spent more than $1.7 million on student salaries for more than 200,000 hours of work and 736 students worked.

Students who work on campus are limited to 20 hours per week, and so many students hold two on-campus jobs or work another part-time job in the community, all while going to classes and doing homework. And, many students meet the challenge of holding a full-time job while a full-time student. 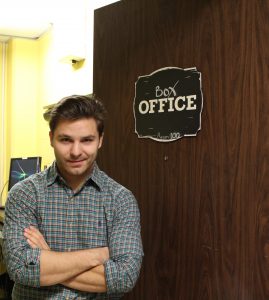 When students are ready to graduate and are looking for a full-time position in their field, McKnight said employers like to see that students have held a job, any job, during their college careers. Many students, he said, may not work when they are freshmen or sophomores so that they can concentrate on their school work, but by their junior or senior year, they start thinking about what will be on their resume when they graduate.

The last survey taken of Missouri Western students revealed that 75 percent of them had at least one job, and he estimates that most of them work at least 20 hours per week.

“I like when a student connects their job on campus with what they want for a career,” McKnight said. “I like those Aha! moments.”

What do you see when you look out your office window? When Victoria Byerley ’15 was completing a six-month internship last year, her view was of her “absolutely favorite place in the world,” Walt Disney World in Orlando, Florida.

Byerley was selected for a professional internship with Disney after she graduated with a Bachelor of Business Administration in Marketing in May 2015. She worked closely with two Disney employees in the Theme Parks and Resorts pricing from June 10 through Dec. 29, focusing on niche and international 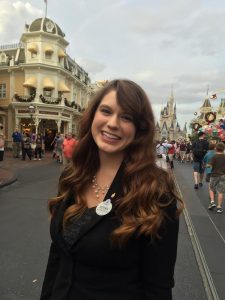 “I really did feel like I was an important part of the team,” she said. “It definitely fulfilled my expectations.”

Byerley noted that this Disney internship is different than the internships the company offers to college students, because all the participants in the professional internship are college graduates, and it is very difficult to get accepted into the program. She said of the seven interns who worked in the pricing area, five had earned master’s degrees or were in master’s degree programs.

One of the perks of the internship, of course, was deeply discounted tickets to Disney World. Byerley estimates she probably visited the parks in her free time at least 70 times.

“It was a lot of fun. It was a good balance of work and play.”

The Disney internship fulfilled a longtime dream for Byerley. She had visited Disney World and Disneyland many times with her family over the years, and had always wanted to work there. “If I was saving money to travel, it was always to go to Disney World.”

Three years ago, Byerley transferred to Missouri Western from a community college near her hometown of Manteno, Illinois, and immediately got involved in several organizations in an effort to meet people. She believes her involvement in the Student Government Association, Western Appeal Acapella, the business fraternity Alpha Kappa Psi, the Craig School of Business Dean’s Advisory Council and serving as a student ambassador helped her obtain the Disney internship.

“It really helped me stand out against my peers, and the skills I learned at Missouri Western helped me with my internship.”

Byerley said she also appreciated the help she received from the Career Development Center as a participant in the center’s SPARTA (Student Professional and Academic Retention Tracking Assessment) program when she was a student.

Meeting one-on-one with the center’s director, Kay-lynne Taylor, gave her the opportunity to really think about her strengths and learn about career options she hadn’t considered.

“It helped me think about what I really wanted, and to make a decision about the future. Meeting with Kay-lynne showed me a lot about myself that I hadn’t thought about,” Byerley said. “It helped me move on to try for the Disney internship.”

When she returned from her internship, she began working in the Human Resources Office at H & R Block in Kansas City, Missouri.

Sarah Fergione: Houston, we have an intern
After visiting the Remington Hall labs and learning that she could conduct research with Missouri Western professors, Sarah Fergione knew she had found the right place to finish her college education. Fergione, a native of East Lyme, Connecticut, said she moved around a lot and attended several colleges because her husband is in the military, and she was impressed with Missouri Western’s science labs. 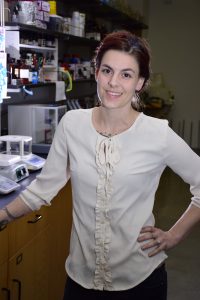 “There is so much instrumentation that schools with a much higher population don’t have,” she said. “And, a lot of places don’t put an emphasis on research until your junior or senior year, but (at Missouri Western) they want you to jump right in with research.”

That hands-on experience in the labs and her opportunity to conduct research with faculty helped Fergione secure a three-month internship at NASA’s Johnson Space Center in Houston during the summer of 2015.

At the space center, Fergione a senior biochemistry and molecular biology major, mainly worked in the microbiology lab on an independent research project involving water samples and bacteria from the International Space Station. “I was seeing if the microbes reacted differently to stressors on earth as opposed to in space,” she said.

Her internship included rotations in several labs, including an immunology lab and a food lab (Did you know our taste buds don’t work as well in space as they do on earth?) Fergione said she also worked with a team of engineers on the Orion Spacecraft’s condensing heat exchanger, testing it to see if microbes could form on it. Orion is NASA’s new human spacecraft that is slated to travel to Mars.

“The most important thing I learned was how important collaboration is. There’s not a lab (at Johnson) that works by itself,” she said.

Fergione graduates this month and plans to attend graduate school this fall to study biological/biomedical engineering and cancer biology.

“Missouri Western offered a lot of extras through the research,” she said. “It’s a really good environment.”