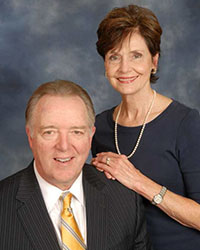 Dan and Dale Boulware
R. Dan Boulware is a partner in the national law firm of Polsinelli and chair of the firm’s contingency fee practice. A fellow in the American College of Trial Lawyers, Dan is recognized by his peers as being among the top one percent of all trial attorneys in the country, and is admitted to practice before the U.S. Supreme Court and numerous federal and state courts. He received both his bachelor and law degrees from the University of Kansas. Dan has been actively engaged in the community and is a tireless supporter of Missouri Western. He is a former president of the University’s governing board and received an honorary degree from Missouri Western in 2012. The R. Dan Boulware Convocation on Critical Issues, which brings nationally prominent speakers to campus each fall, is named in his honor. 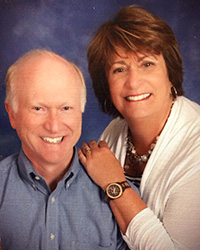 Dr. Mark and Mary Margaret Laney
Dr. Mark Laney has been president and CEO of Heartland Health/Mosaic Life Care since 2009. Previously, Mark served for 20 years at Cook Children’s Health Care System, including eight years as the president of the Cook Children’s Physician Network. He serves on many boards, including the Mayo Clinic Alumni Association, Institute for Industrial and Applied Life Sciences, the St. Joseph Chamber of Commerce, Community Alliance of St. Joseph, Success by 6 and the Missouri Hospital Association, where he is past president. Mark earned a bachelor’s degree from the University of North Texas in Denton and a Doctor of Medicine from the University of Texas Medical Branch in Galveston. He also completed a Pediatric Neurology Fellowship at Mayo Clinic and received a Master of Science in medical management at the University of Texas at Dallas and the University of Texas Southwestern in Dallas.

Mary Margaret Laney was born and raised in Little Rock, Ark. Shortly after high school, she went to work at the University of Arkansas Medical Center and discovered a home in the hospital environment. Mary Margaret is a graduate of the Baptist System School of Nursing in Little Rock and is a Registered Nurse. After a brief stint in the ICU at Baptist Hospital, she transferred to Arkansas Children’s Hospital. She continued working with children from that point on. Mark and Mary Margaret are members of the Missouri Western Arts Society, and Mary Margaret serves on the Society’s Board of Directors.