James “Bo” White fits the description of the ultimate fan perfectly. A spectator now, White was once a part of the teams he now supports from the stands. Originally from Carrollton, Missouri, White came to Western in the fall of 1979 as a basketball player.

“I came up here as a slim man to play basketball,” White said. “Back then, they had a freshman team, and I played on that.”

When told by coaches he was not quite tall enough for basketball, White switched to football. Even though White played for coach Rob Hicklin for four years, graduation was not in his plans.

The lure of money was too much to resist and White started working at Johnson Controls, where he stayed for 18 years.

But Griffon pride runs deep. White returned to campus in 2007 and can be found working in the Western dining hall where he is recognized by students all the time.

Athletes are always excited to hear that White is going to their games. He even travels to most away games with another football alumni.

“We even went to their first playoff game,” White said about last year’s football team. “We drove down to Texas and stayed in the hotel with the team.”

As a Gold Coat member, White can be seen — if not heard — at nearly all home games.

“If I miss a game, it’s only because of a family emergency,” White said.

Several years ago, Ryan Menley, communications director for Griffon athletics, asked White to make appearances on Griffon Sports Insider (GSI). “Bo Knows” is now a regular feature on GSI. White also enjoys recording segments or just gestures that are then featured on the video board at Spratt Stadium during games.

“Bo’s transition into a recurring character was organic,” Menley said. An impromptu interview during a tailgate where White offered his insight into a Griffon football game led to his GSI career. And he was so naturally funny. Just because of his personality and his stature, White evolved into more of a caricature. “Jimmy Fallon has Guillermo — we have Big Bo,” Menley said.

Bo knows sports, and sports fans know Bo. He is the ultimate fan. 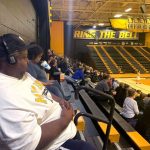 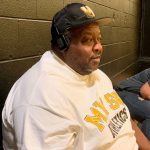 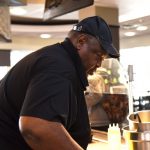 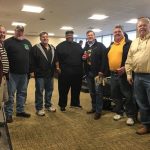 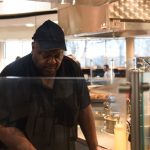