Starting the 2016-2017 season with a new coach and new uniforms, the Missouri Western cheer squad took on the season with excitement and determination. This year the squad welcomed Arielle Ziegler to the team, and while the change came with it’s challenges, Ziegler set the standards high for the years to come.

A coaching change is always hard for any sport, but having supportive members like senior Taylor Guess, helped make the transition easier. Guess has been on the cheer squad for three years and is now team captain.

“The new coach change was tough at the beginning but she learned fast,” Guess said. “She had us three captains guiding her on what she needed to know. She made it pretty easy to adjust, and really pushed us to our full potential.”

Guess has been a cheerleader for seven years between her high school years and her time here at Missouri Western. She enjoys her team and her time spent with them, and Ziegler helped improve the team’s bonding.

“There are so many favorite memories but really this last season, the team we had was amazing, the bonding we had was so close and everything we did we put our all into and had so much fun at practices,” Guess said.

Ivory Samela Cohens has been on the cheer squad at Missouri Western going on four years. She doubles as a strong base and impeccable flyer. The ability to do both of these skills is very useful to the squad because it gives the squad more options and flexibility when it comes to creating a routine. According to Cohens, the new coach has fit right in while improving the team as well.

”We have improved, and her coaching styles and techniques are different,” said Cohens. “But the only thing for me that was tough to take in was the coach being only 2-3 years older than me.”

In addition to performing routines at Western events, the cheer squad hosts several community and youth activities throughout the year, which Cohens says are her favorite part of cheer.

“I enjoy many activities that the squad participates in, especially playing with the little kids at Night Out with the Griffs,” said Cohens.

While this year may have been full of changes, moving forward the team will continue to grow stronger as Ziegler settles into her new Griffon home. 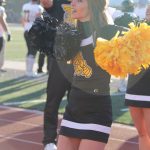 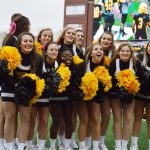 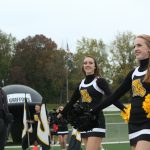 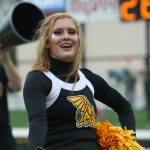 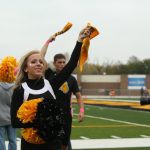