Getting involved in the School of Fine Arts from the days of its inception has allowed Willenbrink to see and experience the growth and change that is ongoing.

“The school has grown in a number of ways,” Willenbrink said. “Physically, we were able to renovate this building so that it looks much better. We’ve been able to explore and expand our programs, change the degrees somewhat; we were able to add more faculty to enhance the educational experience of our students.”

Willenbrink was most proud of these changes and the continual addition of new faculty and facilities because of the impact it has on the education process as a whole.

“We’re able to serve the students better, that’s been the greatest accomplishment.”

One other project Willenbrink has been heavily involved in is the acclaimed one-man multimedia performance he originally directed entitled Cronkite, so named for the famed news anchor whose memorial is housed at Western.

Jeff Stover, Chair of the Department of Theatre, Cinema & Dance, has been working with Willenbrink since his first days here and has also been heavily involved with Cronkite.

“I believe that it (Cronkite) was well received by the patrons who have come to see it. It is a labor of love for many that are involved.”

Willenbrink works on much more than just theatre productions, however, and the work is both audible and visible the moment you set foot in Potter Hall, home of the School of Fine Arts.

“I enjoy, the most, working with people, working with fellow artists. There’s always something going on. You hear music; you see dance. That’s the best part of my job is the people and the things that go on and the opportunity to see our students grow and perform.”

One student Willenbrink has worked with on a number of projects, Skyla Booth, said he specifically (what did he do with Skyla).

Under Willenbrink’s guidance, the School of Fine Arts has continually produced high quality content and flourished. As he continues his tenure he hopes to continue this tradition and emphasize the important role of the arts in the lives of everyone.

“From the moment you wake up until the time you go to bed your life is influenced by art … The arts are the core of our existence.” 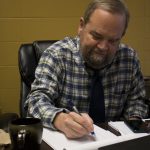 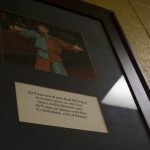 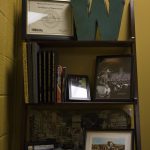 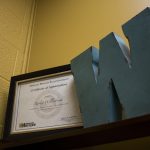