LOYALTY
Bear true faith and allegiance to the U.S. Constitution, the Army, your unit, and other soldiers.

RESPECT
Treat people as they should be treated.

SELFLESS SERVICE
Put the welfare of the nation, the Army and your subordinates before your own.

HONOR
Live up to all Army values.

I am an Army Cadet. Soon I will take an oath and become an Army Officer committed to defending the values, which make this nation great. Honor is my touchstone. I understand mission first and people always.

I am the past: the spirit of those warriors who have made the final sacrifice.

I am the present: the scholar and apprentice soldier enhancing my skills in the science of warfare and the art of leadership.

But, above all, I am the future: the future warrior leader of the United States Army.

May God give me the compassion and judgment to lead and the gallantry to win.

I will do my duty. 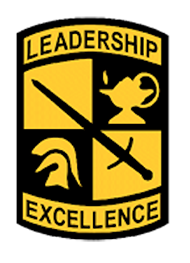 The shield symbolizes the Army’s mission of national defense and is divided into quarters representing the four traditional military science courses compromising the senior ROTC curriculum. The sword signifies the courage, gallantry and self sacrifice intrinsic to the profession of arms. The lamp denotes the pursuit of knowledge, higher learning and the partnership of Army ROTC with American colleges and universities. The Greek helmet is symbolic of the ancient civilization concept of the warrior-scholar. The motto “Leadership Excellence” expresses the ultimate responsibility of Army ROTC in the discharge of its moral responsibility to the Nation.

1st General Order
“I will guard everything within the limits of my post and quit my post only when properly relieved.”

2nd General Order
“I will obey my special orders and perform all of my duties in a military manner.”

3rd General Order
“I will report violations of my special orders, emergencies, and anything not covered in my instructions, to the commander of the relief.”

I, _____, do solemnly swear that I will support and defend the Constitution of the United States against all enemies, foreign and domestic, that I will bear true faith and allegiance to the same; and that I will obey the orders of the officers appointed over me, according to regulations and the Uniform Code of Military Justice. So help me God.

I am an American Soldier.

I am a warrior and a member of a team.

I serve the people of the United States, and live the Army Values.

I will always place the mission first.

I will never accept defeat.

I will never quit.

I will never leave a fallen comrade.

I am disciplined, physically and mentally tough, trained and proficient in my warrior tasks and drills.

I always maintain my arms, my equipment and myself.

I am an expert and I am a professional.

I stand ready to deploy, engage, and destroy, the enemies of the United States of America in close combat.

I am a guardian of freedom and the American way of life.

I am an American Soldier. 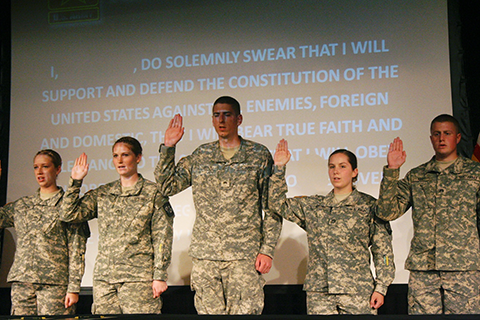