We are continuing to monitor the COVID-19 situation. Missouri Western is committed to the safety and well-being of our campus community and fulfilling our mission of education and service. For updates, alerts and more information, visit the COVID-19 website. 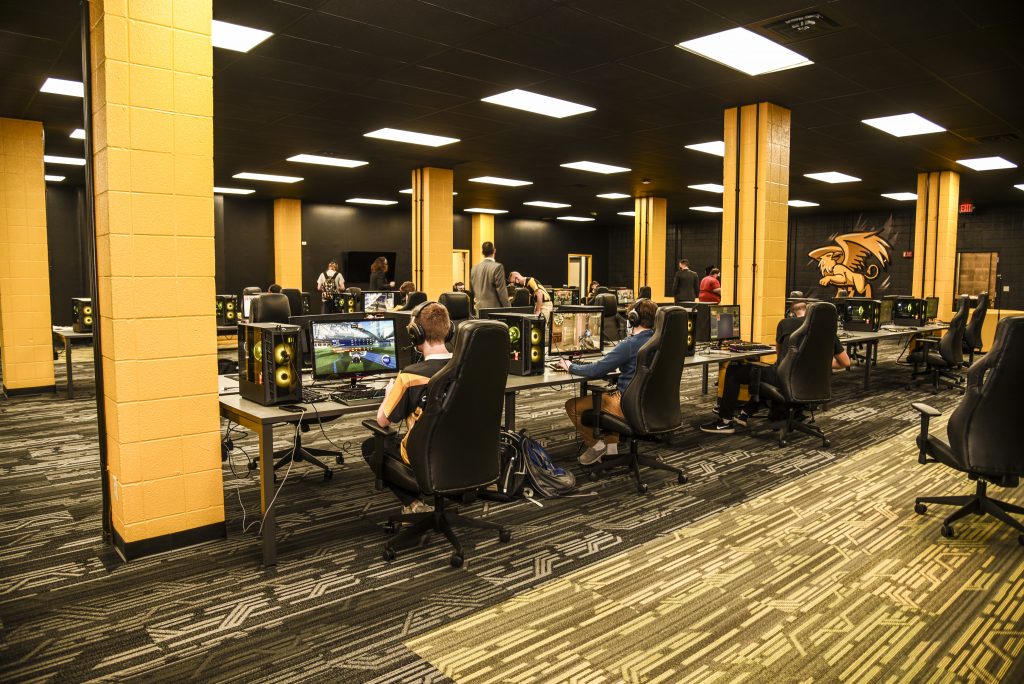 March 5, 2021–Missouri Western State University celebrated the grand opening of the Griffon Esports Arena in the Blum Student Union on March 4, followed by varsity and club athletes playing a 24-hour livestream for charity.

“We’re really excited now to be able to rally around our Griffon Esports team,” said Dr. Elizabeth Kennedy, president of Missouri Western State University. “The new esports arena will give these students a place to practice, play and train, just like a traditional sport.”

Esports is organized, team-based multiplayer competitive video gaming, and has exploded in popularity in recent years. Christian Konczal came to Missouri Western a little over a year ago, charged with building a new program as director and head coach of Griffon Esports/

“I am unbelievably proud of what we have accomplished in that year, in spite of seemingly every curve ball the universe could throw at us,” Konczal said. “These accomplishments speak to the hard work, passion and unadulterated enthusiasm of our students.”

The arena, featuring state-of-the-art gaming platforms and livestream technology, was built with funds provided by the Student Government Association and private donors led by Pete and Staci ‘92 Gray.

“Our community built this,” Konczal said, talking not only of the funding but the actual work: Missouri Western’s physical plant staff renovated the former bookstore space, information technology staff installed the necessary technology; area companies like Yellow Frog Graphics of St. Joseph and Esport Supply of Overland Park, Kansas, enhanced the look of the new space and provided much of the equipment. 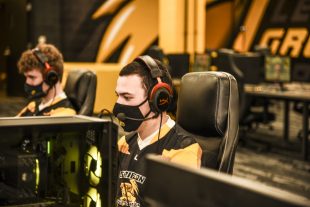 The facility represents an investment in Missouri Western students that goes beyond a place to play games, said Nathan Scott, senior business major from Savannah, Missouri, and SGA president.

“This is a community,” Scott said, comparing it to gathering places like bowling alleys and shopping centers of the past. “While this arena might be a venue for playing games, what people are staying for is the community and the connection that this program provides.”

In addition, Scott said, it’s a spectacular venue for applied learning, providing opportunities to learn about the booming business of esports as well as organizational leadership.

“Since day one, this program has been focused on student leadership,” Scott said.

Konczal said as soon as he was named esports director in late 2019, students have reached out to him to be involved, and he put them to work. Shortly after he arrived on campus, the COVID-19 pandemic hit and that, Konczal said, is when leaders emerged, creating the Griffon Quarantine Event Series to raise awareness for local small businesses that were adjusting to the new normal. That leadership continued when deciding how best to celebrate the arena’s grand opening. Shortly after the ribbon-cutting ceremony ended, varsity and club members began a 24-hour livestream to raise money for Children’s Miracle Network through Extra Life.

“Not even an hour into this facility being open, and our students, the esports community, will spend its first 24 hours giving back,” Scott said. “I think this speaks volumes to the spirit of this program and of this community.”

The fundraiser’s goal was $1,000. The goal was exceeded within three hours, and at the livestream’s end Griffon Esports had raised more than $1,600.