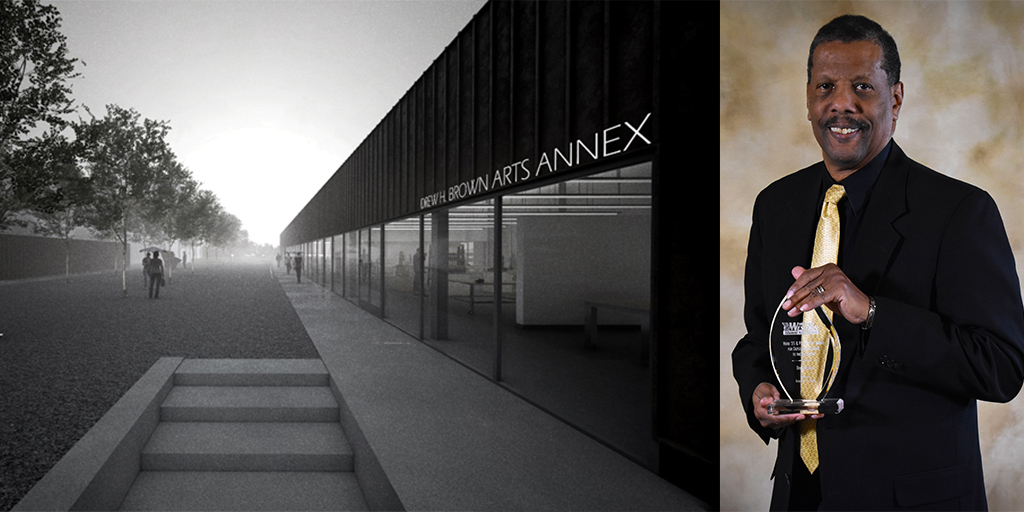 April 9, 2019—The project to enhance Potter Hall at Missouri Western State University has received a $1 million gift from Drew H. Brown of St. Joseph to support the addition of a visual arts annex. When constructed, the addition will be known as the Drew H. Brown Arts Annex. The announcement was made during the Missouri Western State University Foundation’s annual Donor Appreciation Reception April 9.

“Drew Brown has been one of Missouri Western State University’s most active supporters for many years,” said Dr. Robert Vartabedian, Missouri Western’s president. “He has provided leadership to many areas of campus, giving generously of his time and wise counsel, and I am very grateful that he has added to his legacy with such a generous gift.”

Brown served a long and distinguished career in the U.S. Army, retiring as a lieutenant colonel in 1992, and is currently a self-employed investment manager. He served on the Missouri Western State University Foundation Board of Directors and is currently chair of the Missouri Western Arts Society. He has also served as a mentor and volunteer through the University’s Center for Multicultural Education, mentoring students of color and providing guidance and encouragement to them in their pursuit of a college education. Last fall, he received the Herb ’35 and Peggy Iffert Award for Outstanding Service to the University from the Missouri Western Alumni Association.

“I love this university,” Brown said. “Missouri Western brings so much to the St. Joseph community, and I welcome that, whether it’s arts offerings, the expertise of its faculty or most importantly workforce development. We all want a better life, and most students come to Missouri Western because they see it as the key to that better life.”

Brown’s gift is part of Missouri Western’s Centennial Capital Campaign, launched in January, 2015, the University’s centennial year. Brown’s gift brings the campaign total to $30,448,759 in outright and deferred pledges and gifts, exceeding the initial celebration goal of $20 million by more than 50 percent. But Jerry Pickman, vice president for university advancement and executive director of the Missouri Western Foundation, said there is more to do.

“The Centennial Capital Campaign has already had a transformative effect on our campus, with facility improvements, a new academic program and more,” Pickman said. “It’s vital that we sustain this momentum through the next several months, so we can continue transforming lives for decades to come.”

Addressing donors at the reception, Brown encouraged them to give to Missouri Western.

“Paul’s First Epistle to the Corinthians includes the encouragement to ‘bloom where you are planted,’” Brown said. “We, as donors to Missouri Western, provide the soil in which people can bloom.” He added a quotation from the famous African American educator, Booker T. Washington: “Those who are happiest are those who do the most for others,” and ended his remarks by saying: “Today, I am a happy man!”