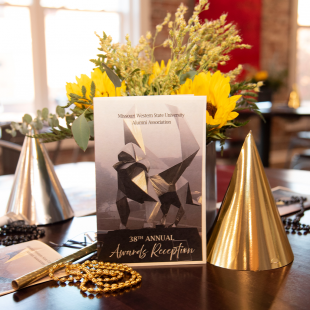 Sept. 9, 2022–The Missouri Western State University Alumni Association has announced the names of those who will be honored at the annual Alumni Award Banquet on Oct. 7 during Homecoming Week. For more information and to purchase tickets to the banquet, visit griff.vn/AlumHC.

Awardees include alumni, a community member, a faculty member and current students.

The Distinguished Alumni Award is the highest award given to a Missouri Western alum. It recognizes living alumni for their career/professional achievements; civic contributions within their local community, state or nation; service to Missouri Western State University, and other qualities which elicit pride from others who attended Missouri Western. This award is given to an alumni with a difference of at least eleven years between attendance and nomination. This year there are two recipients. 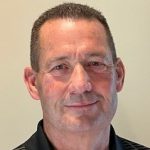 Carter graduated with a Bachelor of Science in Automotive Technology and Business Management. He played for the Griffon football team for three years and coached during his last year. After graduating, he began a 39-year career at General Motors, beginning on the assembly line and rising to several executive positions.

Carter has given back to Missouri Western as an active member of Griffon Football Alumni and the Gold Coat Club. He and his wife, Kathleen, attend every Griffon home football game. Outside of Missouri Western, David has also spent his time as a Junior Achievement advisor working with young people on financial literacy, work readiness and entrepreneurship in Kansas City communities and with United Way at the leadership level. 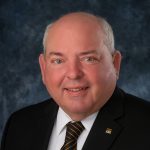 Beesley graduated with a Bachelor of Science in History. He retired as a Colonel after more than 30 years of service in the U.S. Army. After retiring from education in Texas, he moved back to his hometown of St. Joseph, and currently serves as the substitute JROTC instructor for Central High School.

He has served on the Camp Geiger staff, president of his Rotary Club for two terms, a member of the Scottish Rite, Shrine, Masonic bodies and vestry member in the Episcopal Church. He was awarded the Shine On Award by the St. Joseph News-Press for his work with youth in the schools and community. Beesley and his wife, Maryeva, have created a scholarship to help Lafayette High School graduates who wish to attend Missouri Western. He also actively encourages high school seniors to attend Missouri Western and participate in Army ROTC.

GOLD (Graduate of the Last Decade)

The GOLD Award recognizes those early in their career who have had outstanding achievements and accomplishments. The award is based upon professional and educational achievements, community activities, honors and awards received and other noteworthy items of merit since graduation. The nominee must have received his or her initial degree from Missouri Western State University within ten years of June 1 of the year of recognition. 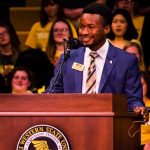 Fataki graduated in 2020 with a Bachelor of Science in Political Science and a Bachelor of Arts in International Studies. As a student, he served in several Student Government Association positions, including student body president for the 2019-2020 school year. He also represented Missouri Western at multiple state and national gatherings, including the National Student Leadership Forum in Washington, D.C.; the Missouri Governor’s Students Leadership Forum in Jefferson City; the 25th Youth Assembly Sponsored by the Friendship Ambassador Foundation in New York City.

Fataki was born in the Democratic Republic of Congo and spent 17 years total in a refugee camp. He is using the experiences he had to help build success for other refugees coming to the United States. He currently serves as a legal coordinator for Erickson Immigration Group. Fataki continues to give back to his community by staying involved in different organizations, including Rotary, Jewish Vocational Services and the Mattie Rhodes Center. 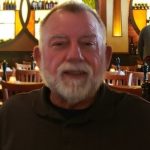 Summers has served as a positive liaison between Missouri Western and the St. Joseph community for several years. He has worked alongside the MWSU Social Work Program, the Organization of Student Social Workers (OSSW) and Northwest Health Services to work towards ending homelessness in the community for at least eight years.

Summers has been a key sponsor in the annual Walk for the Homeless which raises money to help the homeless community in St. Joseph to help obtain I.D. cards, birth certificates and transportation. Each year, he provides the Social Work program a vehicle to use in the Homecoming Parade, places signs around campus to advertise for the Walk, provides the supplies and equipment needed to host the Walk and anything else that Missouri Western needs.

The Distinguished Faculty Award is given to a current faculty member in recognition of one’s lasting influences on students, excellence in teaching, professional/career accomplishments and professional and ethical standards. 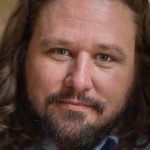 Brecheisen has demonstrated excellence in teaching by truly embracing the spirit and mission of applied learning at Missouri Western State University. He started Griffon Production House (GPH), which provides students quality cinema experience while serving both Missouri Western and the St. Joseph community by producing event broadcasts. Brecheisen volunteers his time to lead the GPH as a service to Missouri Western and its students.

Brecheisen recently won the Outstanding Academic Advisor of the Year award. He took the lead in crafting a student-centered applied learning approach while creating a new Bachelor of Applied Arts that uniquely provides students with the technical and craft related skills needed to be successful in the industry.

The Great Griffon Awards recognize alumni from each college and school who exhibit outstanding contributions to the workforce, society or the University. Nominees do not have to currently work in the area in which they studied and can be recognized for career achievement, service to local communities, state or nations, or the University.

Alford graduated with a Bachelor of Arts in Music. While a student at Missouri Western, Bryan founded Alford Music and Entertainment where he has taught and inspired thousands of students. Bryan credits Missouri Western for the life changing event where he met and learned from the inventor of the steel drums, Dr. Elle Mannette. Bryan became an author in 2012 when he wrote the book series titled “Drumming with Purpose.” This book is now used as a curriculum at Brookside Charter School in Kansas City, Missouri where he is a music educator.

Sansone graduated with a Bachelor of Science in Business Education. She has been a social Studies Teacher at Robidoux Middle School in the St. Joseph School District for 25 years where her excellence and innovation in the classroom has been exemplified. Sansone was named SJSD Aspiring Administration Cohort, SJSD Leadership Symposium, SJSD Teacher of the Year and SJSD Innovator of the Year. She volunteers with different organizations in the community including Washington Park Library Summer Reading Program, Robidoux Advisement Class Community Service Project, Special Olympics, United Way and others.

Austin graduated with a Bachelor of Science in Nursing. Since graduating from Missouri Western, Obie has held many positions including critical care nurse, nurse practitioner, contract provider/consultant and vice president of general medicine. Austin serves as a commander in the U.S. Navy Reserves, where he currently serves as a critical care nurse/family nurse practitioner. He has been a part of numerous medical missions while in the Navy including Honduras, Jamaica, Malaysia, Singapore and Haiti. Currently, Austin is a clinic administrator/nurse practitioner at UMKC and a clinical instructor at Graceland University while giving back to his community as a part of multiple committees, volunteer projects and boards.

The Alumni Student Leadership Awards recognize graduating students (December or May of the current academic year) who have made a significant impact on the life of the University during their tenure through leadership, volunteerism or humanitarianism.

Crayton graduated with a Bachelor of Science in Physical Education. A member of the Griffon football team, he served as a Student Athlete Advisory Committee (SAAC) representative. He also became a leader for student athletes and led discussions on diversity and inclusion. Crayton was a member of the Sigma Kappa Chapter of Alpha Phi Alpha Fraternity, Inc. and held the positions of chaplain and treasurer. He is now working towards his master’s degree.

Rencher will graduate with a Bachelor of Science in Economics in the fall of 2022. He serves as the vice president of the Sigma Kappa Chapter of Alpha Phi Alpha Fraternity, Inc and the President of the National Panhellenic Council (NPC). He also serves as a district official as the Assistant Area 3 Director where he acts as the liaison between college brothers and the District Director for UCM, UMKC, NWMSU and MWSU. He is also a part of the National Society of Leadership and Success.