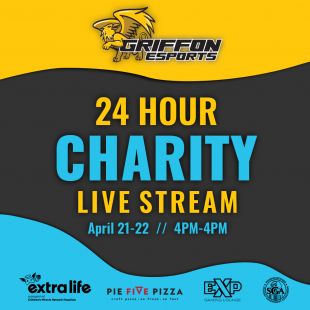 April 20, 2022–Griffon Esports at Missouri Western State University will host a 24-hour livestream for charity starting at 4 p.m. Thursday, April 21. The stream will originate from the Griffon Esports Arena in Blum Union and can be viewed on the program’s Twitch channel, twitch.tv/griffon_esports.

Esports is once again partnering with Extra Life to benefit Children’s Miracle Network Hospitals. Those watching the gamers via the stream will be asked to contribute via the team’s Extra Life page.

Students oversee all aspects of the production. Griffon Esports is pleased to partner with two local businesses, Pie Five and EXP Gaming Lounge, which will sponsor segments of the stream.