Oct. 27, 2021–The last few days of October will be a busy time for Griffon Esports at Missouri Western State University as the program will participate in two major events. A 24-hour charity livestream will originate from the Griffon Esports Arena beginning at 4 p.m. Oct. 28. Meanwhile, the Griffon Overwatch team will travel to South Carolina to participate in the program’s first in-person event, the Peach Belt Conference Overwatch Championship, Oct. 29 and 30.

“This is a very exciting time for Griffon Esports,” said Luke Theis, interim director and coach. “It speaks to not only the competitive success of the students in our program, but to our community spirit as well.” 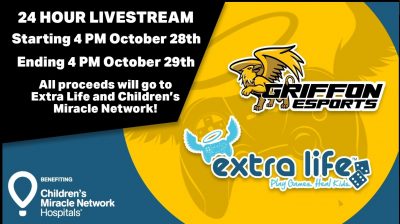 Students will not only be playing the games on the livestream, but will oversee all aspects of the production. A highlight of the stream will be Dr. Elizabeth Kennedy, Missouri Western’s president, taking on Dr. Brett Bruner, assistant vice president and dean of students, in a game of Rocket League at 1 p.m. Friday.

The Peach Belt Overwatch Championship will be contested in Florence, South Carolina, Oct. 29 and 30. The Griffons finished second in the conference’s Red Division with a 5-2 record. They will face the number three team from the Blue Division, Georgia College, in the quarterfinals at 2 p.m. Central time Friday. The winner will play in the semifinal at 11 a.m. Saturday, with the championship set for 4 p.m. Saturday. All matches will be streamed on the Peach Belt Twitch channel, twitch.tv/peachbelt.

For more information about Griffon Esports, visit missouriwestern.edu/esports or join their Discord server.