Thanks to the 139th Airlift Wing for their service, and for the awesome flyover at the home opener. Three-fifths of the flight crew graduated from Missouri Western, including Flight Commander, Capt. Robbie Walling, a former Griffon kicker. #ourcity #gogriffs #griffup pic.twitter.com/kpRW10Wx4P 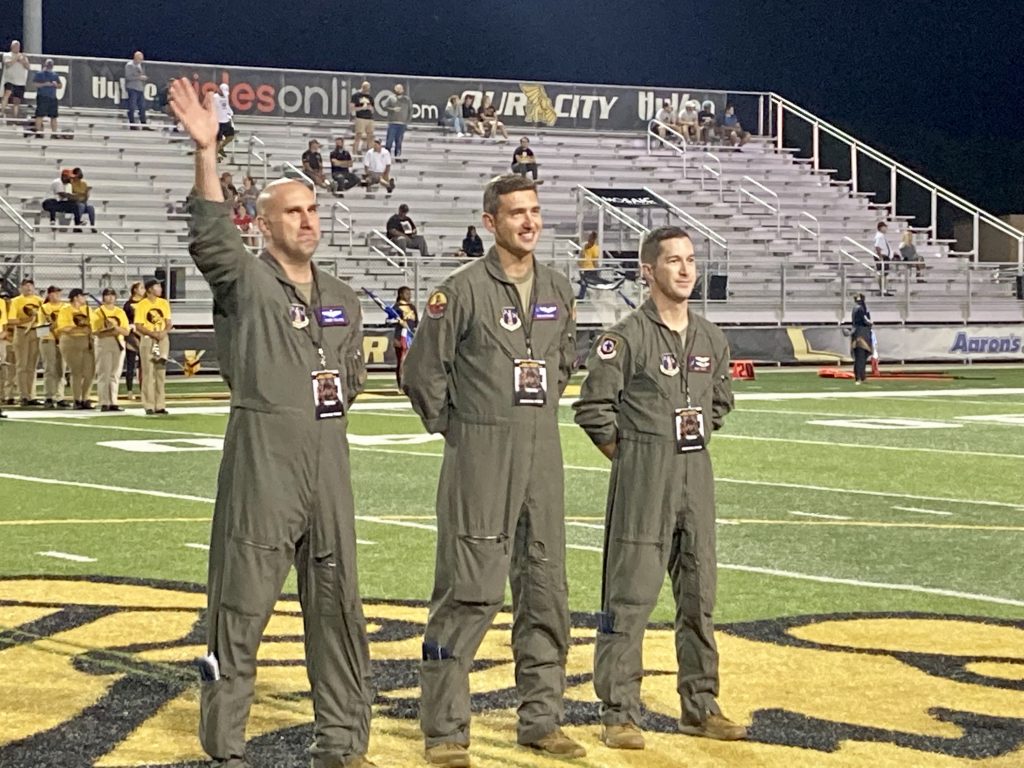 Capt. Robert Walling (left) and two other members of the flight crew are recognized at halftime of the Griffons’ 38-31 win over Ft. Hays State on Sept. 9.

When a C-130H from the 139th Airlift Wing of the Missouri Air National Guard flew over Craig Field at Spratt Memorial Stadium for Military Appreciation Night on Sept. 9, it was a familiar sight for the Flight Commander, albeit from a different perspective. From 2005 to 2008, Capt. Robert Walling prowled the fields and sidelines as a kicker on the Griffon football team.

Robbie Walling kicked eight field goals in his year as a starter, including a game winner with :35 seconds left over Central Missouri. But it was off the field that he found his true passion.

Capt. Walling was a manufacturing engineering technology major. While still a student, he was offered a full-time job at Herzog Contracting after an internship there, and thought that was where his career path would take him. His dad worked full-time at the 139th, but he didn’t really think seriously about following in his footsteps until some Air Guard members reminded him that he could serve part-time and still pursue his business career.

“I always had that desire to follow the family tradition,” Capt. Walling said. “It’s one of the best decisions I ever made in my life.”

Capt. Walling earned his private pilot’s license during his senior year at Missouri Western and went on to join two previous generations of his family as a military aviator. He joined the Air National Guard on Sept. 11, 2010 and was commissioned as an officer the following spring. In the fall of 2011, he started two years’ worth of training, including stops at the Air Force’s Undergraduate Pilot Training at Sheppard Air Force Base in Texas and specialized C-130 training at Little Rock Air Force Base in Arkansas.

After three years of working for Herzog while serving in the Air Guard, Capt. Walling said he needed to adjust his work-life balance.

“Herzog was a phenomenal company to work for, and I owe a lot of my leadership knowledge to them, but something had to give,” he said. As a full-time flyer, he was able to advance his aviation career in a way he couldn’t have while continuing to serve part-time.