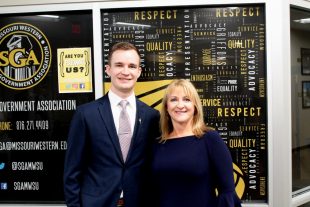 Hayden Glaubius ’21 with Pam Klaus, director of the Center for Franchise Development

June 4, 2021–Hayden Glaubius, a 2021 graduate of the Craig School of Business at Missouri Western State University, was awarded an Auntie Anne’s pretzel franchise in the latest competition sponsored by Missouri Western’s Center for Franchise Development.

“I want to say thank you to all of the judges for taking the time to be here not only today and yesterday, but for letting us do an internship so we could learn more about the business and the daily operations,” Glaubius said. “I look forward to it and it’s an awesome opportunity.”

Glaubius, a management major from St. Joseph, was one of 14 students in a senior-level Applied Business Ownership class this spring. Students in the class prepared business plans, and the two finalists presented them to a panel of judges that included Steven L. Craig, creator of the franchise competition, and other business leaders, as well as representatives from Auntie Anne’s and Missouri Western graduates who won franchises in previous years.

Glaubius first heard about the program while a student in the business program at Central High School in St. Joseph.

“It was always in the back of my head, and I was working towards it, and now seven years later, here we are today,” he said.

The franchise awarded to Glaubius is the 32nd store to be awarded through the program. Alumni currently own 51 stores across the country, employing more than 600 people and generating annual sales of approximately $29 million. The program provides initial capital for the stores, which the alumni pay back over five years. The entrepreneurs also receive ongoing support from faculty members, the Craig School of Business Advisory Council, Craig and each other. Additionally, the owners are expected to donate a portion of their store’s proceeds back to the University. So far, the donations have totaled nearly $280,000.