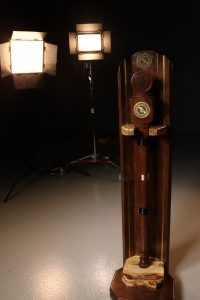 A negative was turned into an amazing positive when the local St. Joseph Woodworkers Guild agreed to create a new ceremonial mace for Missouri Western this spring.

The original mace, which was carried in and placed on the stage at Commencement ceremonies, was stolen in May 2018. When University personnel tried to find a replacement, they realized that very few companies made them, so Dr. Robert Vartabedian, Missouri Western’s president, asked Dave Takes, owner of Expressions Engraved, if he knew of any companies.

But Takes had a better idea. He asked the St. Joseph Woodworkers Guild if they would create a new one for the University, and they were more than happy to help.

“We always like to help people out, and do different things that challenge us,” said Ed Roberts, president of the guild. “It was something we had never done before.”

“It’s really exciting. When they said they wanted a mace, I was all over it. It was something I wanted to do,” guild member John Cox said.

The guild designed the new mace, and Roberts and Cox spent many hours on the project with Ken Gerber ’65, Ralph Alvarez ’71 and Richard Tolbert. The mace, made with local walnut, is approximately 3′ tall and is decorated with brass and ebony rings. Four gold medallions, provided by Takes, are on each side at the top.

For more on this story, see the Spring 2019 issue  of MWSU Magazine.