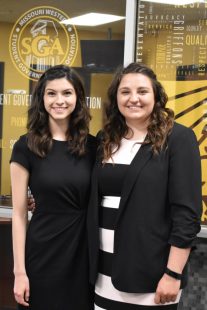 Andrea Hall (left) won the Center for Franchise Development’s annual competition, then asked the other finalist, Michelle Scott, to partner with her in the Auntie Anne’s pretzel franchise.

May 28, 2019—There was one winner but two new business owners in the latest competition by the Center for Franchise Development in the Craig School of Business and Technology at Missouri Western State University. Andrea Hall won the competition and was awarded an Auntie Anne’s pretzel franchise at a location to be announced later. In a first in the ten years of the competition, Steven L. Craig, creator of the franchise development program, announced that Hall asked to partner in the new venture with the other finalist in the program, Michelle Scott.

Hall, of St. Joseph, and Scott, of Maysville, Missouri, were two of a record 16 students to take the senior-level Applied Business Ownership class this spring. They each prepared business plans and the two finalists presented them to a panel of judges that included Craig, other business leaders, representatives from Auntie Anne’s and Missouri Western graduates who won franchises in previous years. The panel selected Hall as the winner.

“It’s a great feeling,” Hall said. “I’ve always dreamed of owning my own business and today this dream has come true, and I’m super excited Michelle and I will be able to pursue this dream together.”

“I’m very excited to go into this adventure with my best friend,” Scott said.

Hall graduated this spring with a major in accounting and a minor in entrepreneurship. She is a swim instructor at Genesis Health Clubs in St. Joseph, and worked on campus as a tutor and peer mentor. Scott graduated this spring with majors in management and marketing. While attending school, she has worked for the DeKalb County Circuit Court since 2015 and is currently the court’s deputy clerk.

“We had two outstanding candidates, and it was a tough, tough decision for the judges,” said Pam Klaus, director of the Center for Franchise Development. “Andrea was selected as the winner, but she and Michelle had planned for a long time to go into business together, so we not only have a winner, we actually formed a partnership today. It’s a unique and exciting day for our program.”

Hall and Scott join 19 alumni owners operating 38 stores and businesses in nine states since the franchise program began ten years ago, in 2009. These alumni-owned businesses employ 319 people and generate $11.8 million in annual sales. The program provides initial capital for the stores, which the alumni pay back over five years. The entrepreneurs also receive ongoing support from faculty members, the Craig School of Business Advisory Council, Craig and each other. Additionally, the owners are expected to donate a portion of their store’s proceeds back to the University. So far, those donations have totaled more than $230,000.

At a Celebration of Entrepreneurship Dinner the evening before the competition, the Champion of Entrepreneurs Award was presented to Dr. Robert Vartabedian, who will retire this summer after 11 years as Missouri Western’s president. Dr. Vartabedian has been a steadfast supporter of the program throughout its history, participating in the judging panel each year. A new award, the Patron of Entrepreneurs Award, was presented to Jim Reinert for his support of the program. Three past franchise winners, LaTricia Adkins, Lynn Eddinger and Allie Canaday were recognized for paying off their loans.