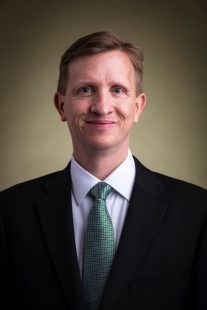 March 13, 2019—By a 5-0 vote Tuesday, March 12, the Board of Governors at Missouri Western State University named Matthew Wilson, J.D., as Missouri Western’s fifth president, starting July 1, 2019. President-Designate Wilson will be introduced to the campus and community during a formal announcement and press conference at 3 p.m., Monday, March 18, in the Remington Atrium. The announcement is open to the public.

“With a long track record in higher education, including previous experience as a university president, Matt Wilson is prepared to serve Missouri Western well,” said David Liechti, chair of the Board of Governors. “As we got to know him through the interview process and in talking to people he has worked with, we appreciated his strong commitment to student success and his innovative and creative approach to problem-solving. Under his leadership, Missouri Western will continue to be a crucial part of the economic and cultural vitality of our region.”

“I am honored that the Governors have put their faith in me and incredibly excited to be joining the Missouri Western family,” President-Designate Wilson said. “I look forward to serving and working closely with outstanding MWSU faculty, students, staff and alumni as well as members of the St. Joseph community. Building on the solid foundation established by Dr. Vartabedian and others, Noriko and I are committed to transforming the lives of students, actively engaging with the community and elevating Missouri Western to even greater heights.”

Wilson is currently a professor of law at the University of Akron School of Law after serving as president of the University of Akron from 2016 to 2018. While president, he helped lead the university to a remarkable two-year budgetary turnaround, eliminating a projected $30 million deficit in 2016-2017 and adding $12 million to reserves. Wilson also participated in fundraising efforts that saw a substantial increase in donations including a $20 million Making a Difference Moving Forward student scholarship campaign and the largest single gift in university history. He also oversaw innovative approaches to student recruitment, retention and internationalization, including:

Prior to serving as president, Wilson was dean of the University of Akron School of Law, where he oversaw a successful $21 million debt-free renovation and fundraising campaign for the law school facilities and helped achieve a 40 percent increase in new student enrollment over two years. He also served as associate dean of the University of Wyoming College of Law and senior associate dean and general counsel of Temple University Japan. He taught a wide variety of law courses at all three schools. He also served as a visiting professor at three universities in Asia and lectured extensively across the country and world.

Before beginning his higher education career, Wilson was a lawyer for Akerman Senterfitt P.A. in Orlando, Florida and general counsel for YPD.com/Advanced Telecommunications Network, Inc., in Tampa, Florida.

Wilson received a Bachelor of Science in Political Science and a Bachelor of Arts in Asian Studies with a Japanese minor from the University of Utah. He earned his Juris Doctor degree from Temple University Beasley School of Law. He and his wife, Noriko, have four children and three grandchildren.