Previous Next
2019 Convocation on Critical Issues will feature Jon Meacham 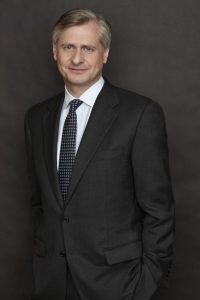 Feb. 20, 2019—Presidential historian and Pulitzer Prize-winning author Jon Meacham will be the guest speaker for the 26th annual R. Dan Boulware Convocation on Critical Issues at Missouri Western State University this fall. His speech, “The Soul of America: Moving Beyond Division and Hostility,” will be at 10 a.m. Thursday, Sept. 26, in the Looney Complex Arena. Meacham will also be the featured guest at the annual Convocation Luncheon at noon Sept. 26 in the Fulkerson Center. Ticketing information for the luncheon will be announced at a later date.

“Division and acrimony in our public discourse is a problem facing our country today that should concern all of us, and I have wanted to address this problem as a critical issue in our Convocation series,” said Dan Boulware, former president of the Missouri Western Board of Regents for whom the speaker series is named. “I heard Jon Meacham speak in San Antonio last year. He enthralled the audience. I realized then that he would be an excellent choice to address this compelling issue. I am pleased and excited we have been able to secure him as our Convocation speaker this year and I believe this has the potential for being one of our very best Convocations. He is a terrific speaker and has a compelling message.”

“Jon Meacham is a gifted writer and speaker, one of the most respected public intellectuals of our time,” said Dr. Robert Vartabedian, Missouri Western’s president. “I’m excited that our campus and community will have the opportunity to hear what he has to say about how America has overcome times of deep division in the past, and how those past experiences might point a way forward today.”

A contributor to TIME and The New York Times Book Review, Meacham is a highly sought-after commentator, regularly appearing on CNN and MSNBC. Known as a skilled orator with a depth of knowledge about politics, religion, and current affairs, Meacham brings historical context to the issues and events impacting our daily lives.

His latest No. 1 New York Times bestseller, “The Soul of America: The Battle for Our Better Angels,” examines the present moment in American politics and life by looking back at critical times in U.S. history when hope overcame division and fear. Meacham is also a co-author of the recently released book, “Impeachment: An American History,” which reveals the complicated motives behind the three presidential impeachments in U.S. history.

Other bestsellers include “Thomas Jefferson: The Art of Power,” “Franklin and Winston,” “American Gospel” and “American Lion: Andrew Jackson in the White House,” which won the Pulitzer Prize in 2009.

A contributing editor at TIME, Meacham writes for the magazine’s Ideas section. He also pens “The Long View” column in The New York Times Book Review in which he “looks back at books that speak to our current historical and cultural moment.” He served as Newsweek’s managing editor from 1998 to 2006 and editor from 2006 to 2010. The New York Times called him “one of the most influential editors in the news magazine business.”