The Board of Governors at Missouri Western State University has approved a balanced budget with no spending from reserves for fiscal year 2017-2018, but administrators caution that additional cuts may be necessary.

“In response to a mid-year withhold of state appropriation in the current fiscal year, we have already taken a number of cost-saving measures,” said Dr. Robert Vartabedian, Missouri Western’s president. “With a cut in state appropriation next fiscal year and a possibility of additional withholds, we will continue to emphasize efficiency.”

The operating budget for 2017-2018 totals approximately $54.5 million. The budget includes a $3.2 million increase in revenue from student tuition and fees. A little less than half of the increase, $1.5 million, comes from rate increases approved by the Board of Governors earlier this year as well as anticipated enrollment growth through the addition of six new intercollegiate sports and enhanced recruiting efforts. Changes to the Griffon Rate scholarship for out-of-state students account for the remaining $1.7 million increase in revenue. The other major revenue source, state appropriations, is expected to drop $1.54 million, or 6.54 percent.

On the expense side of the operating budget, salary and fringe benefit spending will drop by $785,000, primarily because of 18 unfilled positions. Scholarship spending will go up approximately $2 million because of the Griffon Rate change and new sports.

The auxiliary budget for 2017-2018 totals approximately $12 million, with small increases in revenue expected because of anticipated growth in enrollment, residence hall occupancy and board plan utilization.

So far, Missouri Western has taken several steps to reduce expenses and increase revenue in both the current and upcoming fiscal years, including:

In other action, the Board of Governors accepted a bid to replace the wooden bleachers in the M.O. Looney Complex. The low bid was submitted by Interkal Spectacular Seating World Wide of Kalamazoo, Michigan and Heartland Seating, Inc. of Shawnee, Kansas. Funding will be provided by a private donor who wishes to remain anonymous. Installation of the bleachers will be scheduled for May 2018. 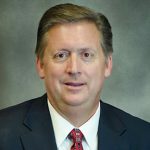 David Liechti, Board of Governors

The board also elected officers for the coming year. David Liechti, who has served the last two years as vice chair, will be the chair for the coming year, replacing Brig. Gen. Gregory Mason. Deborah J. Smith will succeed Liechti as vice chair. The board also named Dr. Cale Fessler, vice president for financial planning and administration, as its treasurer, and Kim Sigrist, executive associate to the president, as its secretary.