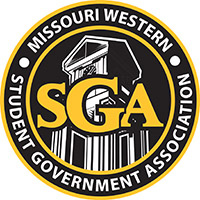 AX Social Stream: There is no feed data to display!

Are you interested in advocating for your fellow Griffons? Are you dedicated to do being the voice for Missouri Western students? Consider running to be next Student Body President/Vice President or a Senator.

Apply to Become a Senator

Candidates must have attended Missouri Western for at least two full semesters prior to the semester in which the election is held. He/she must have a 3.0 G.P.A. and plan to enroll as a full-time student during his/her term of office.
Become a Candidate

Apply to Become a Director