Previous Next
Court of Appeals convenes at Missouri Western Oct 6 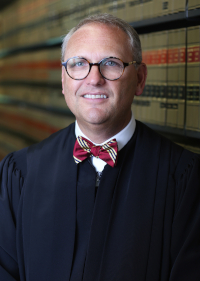 St. Joseph, Missouri –  The Missouri Court of Appeals, Western District, will convene court at Missouri Western State University at 9:30 a.m. Wednesday, Oct. 6 in the Kemper Recital Hall, Spratt Hall room 101. The court session is free and open to the public.

A three-judge panel consisting of Presiding Judge Mark Pfeiffer, Judge Alok Ahuja and Judge Anthony Rex Gabbert will hear oral arguments in four cases. After the oral arguments, the judges will take time to discuss the court system and take general questions from the audience.

The court convenes regularly in Kansas City. For more than 20 years, however, the court has held sessions in several of the 45 counties in the court’s jurisdiction, which includes all of northwest Missouri and most of central Missouri.

The court convenes oral arguments outside of Kansas City to give individuals an opportunity to observe a part of the judicial system they normally do not see and to familiarize those attending with the court’s role in the judicial system.

View summaries of cases to be argued on the Court of Appeals website.