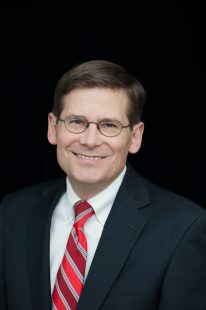 June 10–The 27th annual R. Dan Boulware Convocation on Critical Issues featuring Michael Morell, former acting director and deputy director of the Central Intelligence Agency, originally scheduled for Oct. 1, 2020 has been postponed to September 30, 2021, because of concerns about the COVID-19 pandemic.

“Our hope is to have a fall semester that’s as close to normal as possible, but we know adjustments will need to be made.  Given the capacity crowds we attract for this annual event, this is one adjustment that seems appropriate,” said President Matthew Wilson. “This was a difficult decision, however we feel it is the right thing to do based on feedback from our speaker, organizers, and others. We look forward to welcoming Mr. Morell to St. Joseph and hearing his insights about national security, populism, and American leadership in the world a year later when the safety and health risks associated with this virus have further subsided.”

“These are unusual times requiring flexibility,” said Dan Boulware, the former president of Missouri Western’s Board of Regents for whom the speaker series is named. “I know it’s disappointing for the students, faculty, staff and community members who look forward to the Convocation each year, but with all of the advance planning required for an event of this size, it’s best to postpone the event until next year when we hope much of the uncertainty will be behind us.”

This is just the second time in the Convocation series that the event has not been held as scheduled. In 1995, guest speaker Colin Powell cancelled his appearance as he considered a possible campaign for President. Powell ultimately did not run, and was the Convocation speaker in 1997.

Missouri Western inaugurated the R. Dan Boulware Convocation on Critical Issues program in 1993. The program, sponsored by the Missouri Western State University Foundation, was started as part of an overall commitment to offer enriching experiences to students while bringing together the college and community.