Missouri Western Paints Up the Southside

Missouri Western Paints Up the Southside

Thanks to faculty and students from Missouri Western, Southside St. Joseph is shining with beautiful artwork. This past summer, four students and two alumni under the guidance of Kathy Liao, assistant professor of art, designed and painted an 80’x20′ mural on a building on the corner of Lake and Illinois avenues. And in the fall, they developed the design and painted window panels and other artwork for the facade of the Livestock Exchange building on Packers Avenue. 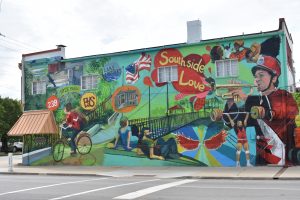 The first mural project came about when the South St. Joseph Development Corporation and Allied Arts Council of St Joseph put a call out for a muralist last spring, and Liao thought it would be a great project for her art students. She designed the mural and coordinated the project, enlisting the help of Indigo Gaydusek ’19 (see “Indigo gets her wings,” p. 7), Acacia Richardson ’19, and students Devin Halbirt, Shelly Lundy, Madison McKinley and Kenneth Young.

She created her proposed design after speaking with many Southside community members, including business owners, historians and librarians.

The mural was also inspired by the feedback from Benton High School students, she said. They fondly recalled riding their bikes to the King Hill lookout that overlooks the MFA building and Livestock Exchange building, so that’s in the mural. Also recognizable on the building are iconic places such as the Carnegie Library, Lake Contrary and Hyde Park, including the suspension bridge. The numerals 238 can also be found in the mural, because many community members told Liao they were proud to be a “238-er,” a reference to the phone prefix for Southside residences. 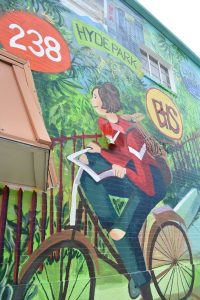 “We wanted to incorporate the theme of the history of the Stockyards, industry and immigration into the mural because the Southside is a place with a deep pride in its own identity and culture,” Liao said. “I was very excited to transform a building facade into a giant piece of art.”

Because of the success of that first project, they were asked to design public art for the historic four-story Exchange building, and Liao made it a class project in the fall 2019 semester.

Built in 1898-99, the Exchange building was a major cultural and business hub for the livestock industry and is listed on the National Register of Historic Places. The Friends of St Joseph Society, led by Dr. Kim Schutte, hopes to repair and return it to its original glory, and bring arts, entertainment, and business back into that area.

“It has been an incredible learning experience for the students and me,” Liao said. “They learned the significance of public art and how it transforms the space and experiences of the people who live and work in the neighborhood.”