Alpha Kappa Psi is the oldest and largest coed, professional business fraternity with more than 250 student and alumni chapters in the United States, Canada, China and the United Kingdom. It was founded in 1904 on the principles of educating its members and the public to appreciate higher ideals in business and to further the individual welfare of its members during college and beyond.

The Rho Upsilon chapter of Alpha Kappa Psi was installed at Missouri Western State University on November 18, 2000. It has been named the “Most Outstanding Departmental Organization of the Year” six times since. Although our primary focus is the pillars of business we accept and encourage students from any major.

We hold various professional events for our members and extend invitations to other students and staff throughout the year. Events to include Speed Mock interviews, etiquette dinners, and having community leaders come to speak on various topics including resumes, internships, interviews, and networking. 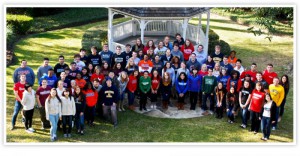 As a BGS lifetime member, you have access to numerous benefits. Find a list of many of these benefits here! From publication discounts to special rates on insurance, career counseling and more, you won’t want to skip out on some of these offers.