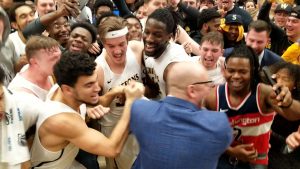 The Feb. 22 win over Southern was a nail-biter that featured 16 lead changes and 15 ties.

Next up, the men play at 7:30 p.m. tonight (Tuesday) at home against Northwest Missouri State and at 3:30 p.m. at home against Washburn to close out their season.  They have also earned a spot in the MIAA postseason tournament that begins March 4 at Municipal Auditorium in Kansas City.

Baseball
Missouri Western Baseball closed out their first home series of the season on Saturday, Feb. 22. The Griffons (4-11) split the doubleheader with Minot State (6-4) 0-11 and 12-7.

Since Feb. 14, the Griffons have won two and lost two, all at the MIAA/GLVC Crossover in Joplin, Missouri.

The team is in Topeka, Kansas to play three games against Washburn University on Feb. 28-March 1. They return home on March 6. 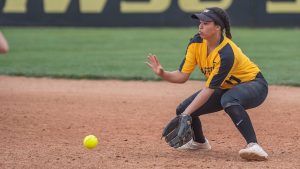 Missouri Western with two losses on its final day in Topeka at the Washburn University softball complex.

On Saturday, the women split with a win against Maryville University and a loss to Minnesota State University-Mankato. The women, coached by Jen Trotter, stand at 3-7. The team plays Missouri Southern at noon on Friday, Feb. 28, Missouri S & T at 10 a.m. and noon on Saturday, and Northern State University at 9 and 11 a.m. on Sunday. All the games will be held in Joplin, Missouri.

Track
The Missouri Western women’s 4×400-meter relay team hit a provisional qualifying time at the Nebraska Tune-Up Feb. 21 in Lincoln. Griffon Track also finished with many personal bests on Friday. The Tune-Up was the last event for the Griffons heading into the MIAA Championships on Feb. 28 in Pittsburg, Kansas.

Next up is Northwest Missouri State Tuesday at 5:30 p.m. at home. They play Washburn at home at 1:30 p.m. on Saturday, Feb. 29 to close out the regular season.

The women have also earned a spot in the MIAA postseason tournament that begins March 4 at Municipal Auditorium in Kansas City.